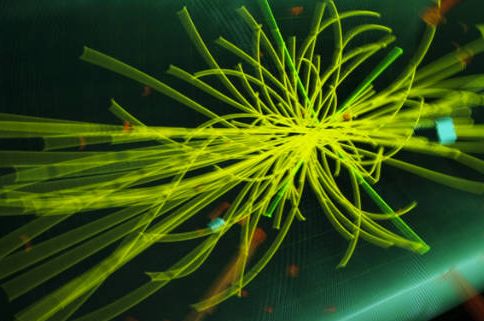 Scientists said yesterday that they’re a little bit closer to answering one of the biggest questions of particle physics: Does the so-called God particle exist?

Gathering in Geneva, Switzerland, experts from around the world revealed results of their search for the particle – known officially as the Higgs boson – using the Large Hadron Collider, the world’s largest atom smasher.

The Higgs boson, which has been theorized but never glimpsed, plays a fundamental role in the workings of our universe. One expert called it the “missing piece of the jigsaw.”

Scientists at Tuesday’s event said they had made strides in their search for the Higgs boson but did not have strong enough conclusions to claim a discovery.

“The first important results are that we have been able to restrict the most likely mass region over the last months to a very narrow range,” Fabiola Gianotti said Tuesday at the European Organization for Nuclear Research, known as CERN. “In this mass region, we see some excessive events. It’s too early to tell if this excess is due to a fluctuation in the background or something more interesting.”

The collider fires together protons, which are positively charged particles that make up all atoms that can interact in many different ways. Scientists are looking very closely for a “Higgs bump,” which is “literally a bump in a graph which will pop up and say, ‘that’s it!’ ” said physicist Martin Archer of the Imperial College of London.

“It is too early to draw a definite conclusion. More studies and more data are needed. We have built solid foundations for the exciting months to come,” Gianotti added. “We are discussing something, which is the last chapter we hope for a story which lasts since 47 years.”

Two groups of scientists worked independently on different parts of the hydrogen collider to watch and analyze the particle collisions.

“As of today, what we see is consistent either with a background fluctuation or with the presence of the boson,” said Guido Tonelli, another scientist who participated in the research. “Refined analyses and additional data delivered in 2012 by this magnificent machine will definitely give an answer.”

The Standard Model is the theory physicists use to describe the behavior of fundamental particles and the forces that act between them. It describes the ordinary matter from which we, and everything visible in the universe, are made and does it extremely well. Nevertheless, the Standard Model does not describe the 96% of the universe that is invisible: so-called Dark Matter. One of the main goals of the collider’s research program is to go beyond the Standard Model, and the Higgs boson could be the key, CERN scientists explained.

“The very good news that we know from today that in the next year, it’s very likely we might get an answer that we could consider solid,” Tonelli said.

Scientists said yesterday that they’re a little bit closer to answering one of the biggest questions of particle physics: Does the so-called God particle exist?

So what will this all prove?
In the beginning God created the heavens and the Earth. That’s all that needs knowing.

God also gave us a brain, and the curiousity and thirst for knowledge to use it. That’s what these scientists are doing.

In addition, there are “real world” spin off techologies that result from this sort of research. Electricity was once a scientific curiousity surrounded by a lot of “what’s the point?” detractors.

They are trying to prove evolution. That things just happened themselves. Science proves contrary to this.