Saturday’s national forecast – A ridge for a time (+12 maps) 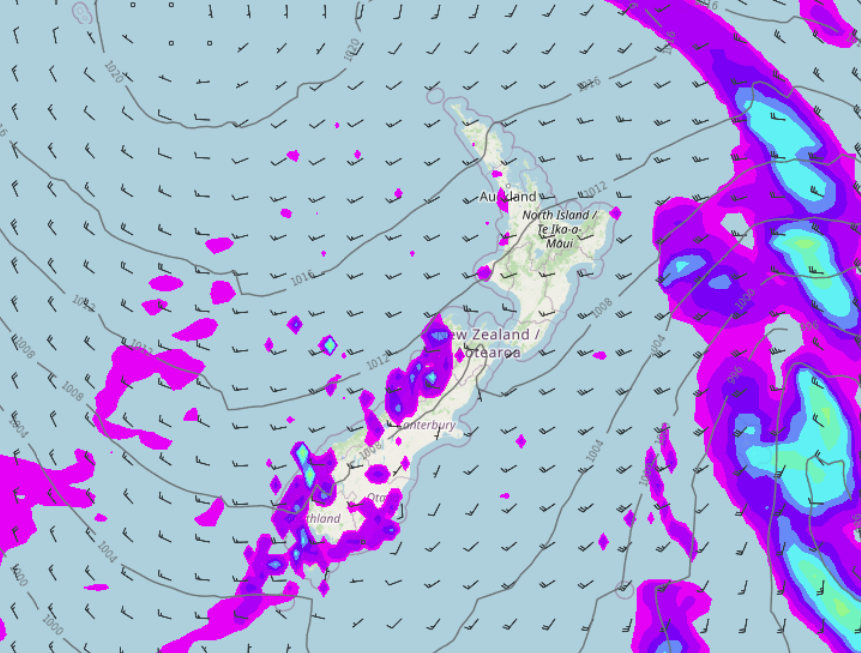 A ridge of high pressure moves in today settling conditions down for a time, there’s still some unsettled weather for the North Island this morning though then backing off. Showers pester western regions for much of today, drier in the east generally speaking.

Northland, Auckland, Waikato & Bay Of Plenty
Morning heavy showers, some hail and perhaps a rumble of thunder. Easing in the afternoon and mostly clearing evening, the odd shower may remain out west overnight. Sunny spells break through from morning. Fresh gusty southwesterlies ease later in the day.
Highs: 15-17

Western North Island (including Central North Island)
Morning heavy showers, some hail, perhaps a rumble of thunder and snow flurries to 700m then easing in the afternoon and showers clearing away. Southwesterlies die out in the evening.
Highs: 8-15

Eastern North Island
Heavy showers in the morning for Wairarapa, some hail too, just a few showers further north then clearing up in the afternoon with sun increasing. Fresh southwesterlies die out in the evening.
Highs: 13-17

Wellington
Early heavy showers with hail, easing and any remaining showers clear around midday. Becoming sunny in the afternoon with fresh southerlies dying away.
Highs: 13-14

Marlborough & Nelson
Any early showers clear then sunny, southwesterlies tend to the northeast in the afternoon.
Highs: 13-16

Canterbury
Any early showers clear Banks Peninsula, sunny otherwise. Cloud thickens up in the afternoon with southerlies, perhaps some drizzle inland then cloud breaking later in the day.
Highs: 11-13

West Coast
A few showers for Fiordland and Buller, partly cloudy. Cloud thickening up in the afternoon with showers for most. Southwesterly winds.
Highs: 10-14

Southland & Otago
Showers, easing during the afternoon then clearing evening. Southwesterlies tend to the west after midday however tending northeast for coastal Otago in the evening. Some sun may break through in the afternoon. Snow flurries to 500m in the morning then lifting.
Highs: 10-13