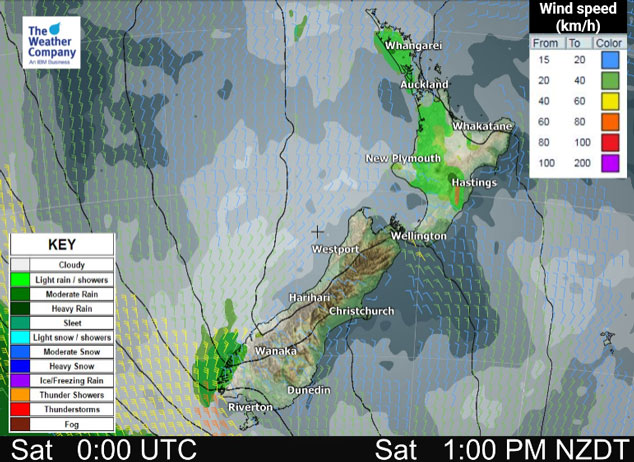 A large anticyclone sits off to the east of New Zealand today draping a humid northerly quarter airflow over the country.

Northland, Auckland, Waikato & Bay Of Plenty
Morning fog possible then expect sunny spells, isolated showers in the afternoon with the chance of a heavy fall / thunderstorm about inland areas away from the coast, clearing evening. Auckland in the city only has the chance of an isolated shower, showers more likely about rural northern and southern parts of the Auckland region. North to northeasterly winds.
Highs: 19-23

Western North Island (including Central North Island)
Morning cloud breaks to sunny areas, cloud may persist during the day about the likes of New Plymouth and Kapiti. Cloud builds in the afternoon about inland hills / ranges where isolated showers develop. A few showers may turn heavy then clearing away in the evening. Northwesterly winds.
Highs: 18-22

Eastern North Island
Mostly sunny, some cloud builds in the afternoon about the ranges where a few isolated showers get going. A few of these showers may turn heavy / thundery then clearing in the evening. Generally dry right on the coast but late afternoon / early evening a few showers may briefly spread from the ranges for a time. Light winds.
Highs: 21-24

Marlborough & Nelson
Sunny, some cloud for Nelson and about the Sounds from afternoon. North to northwesterly winds.
Highs: 19-24