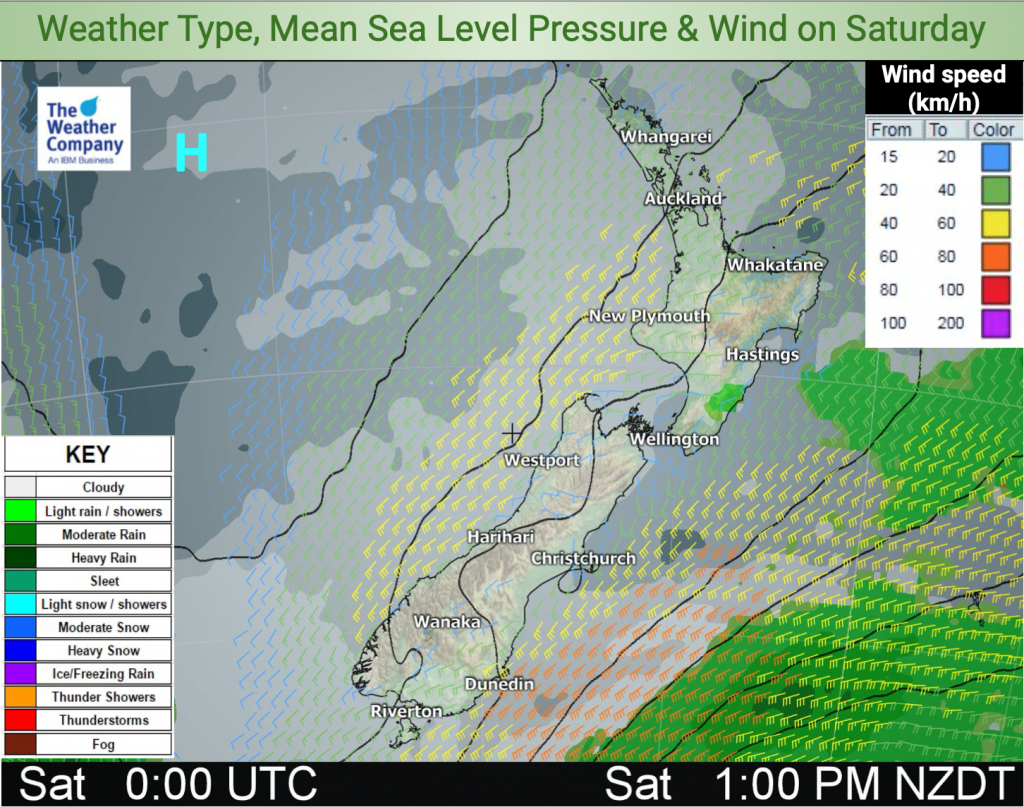 A southwesterly airflow lies over New Zealand today, easing later on / overnight as a ridge pushes in from the Tasman Sea.

Mostly sunny for Waikato and Bay Of Plenty with some high cloud. Auckland and Northland see cloud at times especially in the west. Southwesterly winds, blustery this afternoon then easing later in the day. Any morning mid level cloud about Taranaki through to Kapiti breaks then expect sunny areas and high cloud. Closer towards the eastern ranges (i.e. Palmerston North) expect some cloud and a few showers, clearing in the evening. Showers about Wairarapa spread into Hawkes Bay and Gisborne this morning then easing and clearing in the evening, winds cool from the south or southwest.

A mostly cloudy day north of about Hokitika in the west with the odd shower, clearing in the evening. Further south along the West Coast conditions are sunnier with some high cloud, temperatures warmer too. Nelson has a mix of sun and high cloud, southwesterlies tend northerly in the afternoon. A chance of morning sun for Marlborough then becoming mostly cloudy, light winds then afternoon easterlies. Morning cloud for Canterbury, any coastal showers clear then some afternoon sun but expect plenty of high cloud, southwesterly winds.

Mostly cloudy about Southland with the odd shower, easing in the afternoon and clearing away with some sun breaking through. Coastal Otago has morning cloud (any early showers clear) break to some afternoon sun, areas of high cloud however. Central Otago has a mix of sun and high cloud. Winds from the southwest.

A cooler than normal day today for most although most of the upper North Island is fairly average, only a touch below average in the west. South Westland (just inland) may feel a little warmer than normal due to a south to southeasterly airflow kicking in there during the day, much like a northwesterly Canterbury would get but in reverse. The coldest day time highs will be around Southland with 12 to 13 degrees likely, the warmest spot will be eastern Bay Of Plenty getting into the mid twenties.