Saturday – Reports from across NZ 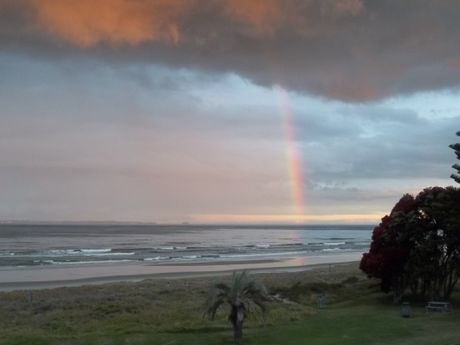 It’s been an active 12 hours and the system delivering a punch to parts of the country isn’t quite finished yet it seems.

Thunderstorms did fail to turn up last night for Auckland but other areas saw heavy rain, rumbles of thunder and a wind to boot.

Severe thunderstorm warnings have continued to be issued by the Government Forecaster overnight and this morning for the Bay of Plenty.

WeatherWatch has received many comments and posts about the situation across the north.

Andrea mentioned from the Bay of Plenty first thing this morning “Have been awake for the last two hours… Torrential rain and a couple of claps of thunder… Still some distant thunder around, also lots of flooding – Mount Maunganui”.
Bianca mentioned how serious it was getting “Woken up by my neighbours to my house, driveway and car flooded under water im Papamoa the water is well past my ankles everywhere, lucky I’m on to it and have insurance cause I sure will need to make a claim now
Elaine updated us on the flooding situation a short time ago.. “Had a rough night here in Papamoa. Flooding is going down but we were mostly underwater here around 5am. Still the odd thunder out to sea rolling around and we have just light rain now”.
The comments kept coming..” Slept through that thunder and lightening……awake during the night with heavy rain, but calm here in Pyes Pa since we got up at 5:45am…..& we can see the top of the Mt quite clearly at the moment” and another added “I think we got the rain we wanted…the problem is it all fell in about 30 minutes! Wading through water probably a good foot deep trying to get to my car in Papamoa”.
Mount Manganui didn’t escape with one reader reporting “It sounds like the entire town was affected. I’ve heard reports of all shops have flood damage – one had water right up to the windows and the roundabout by Burger King submerged under water”.

Further south and Dale said  on our Facebook page “Blowing a dog off it’s chain here in Greymouth.. nasty gusty winds, a wee little bit of rain but I think the around Brunner cycle race today will be doing some record times with the tailwind on their side!”

Helen posted earlier”It’s been chucking it down most of the night here (nr Sheffield, Canterbury).. deafening at times.”

Cara was being entertained “Bucketing down in Christchurch, dogs refused to go out for toilet break so now sit cross legged until it stops LOL”.

We appreciate your comments and updates and feel free to join our Facebook page if you haven’t already for the latest reports from all over New Zealand.
https://www.facebook.com/WeatherWatch.co.nz

She’s blowing a gale here in Levin . weve had a little bit of rain but its the wind thats the main player cheers Phil Smith Levin