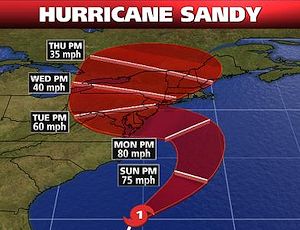 Last night, for a brief time, Sandy was “downgraded” to a tropical storm.  Today, it’s back to being a hurricane again.

The storm’s brief weakening was expected.  The weakening was also very minor.  The maximum sustained winds fell from 120 km/h to 112 km/h.  The winds are now back to 120 km/h

For the last few days, there has been much uncertainty regarding Sandy’s path.  But the two computer models that we rely on the most are coming into agreement and both of the storm making landfall sometime late on Monday (US time) on the coast of New Jersey or the Delmarva Peninsula (a small chunk of land that is shared by the states of Delaware, Maryland and Virginia.)

While the exact track of the storm is important for figuring out storm surge, it’s not as important when determining who will be affected by the storm.  Sandy is enormous.  In a few days, this storm could be affecting up to ¼ of the continental United States.  In fact, right now there are warnings and advisories in effect from Florida to Maine.

Current indications are that the hardest hit areas will be from Norfolk, Virginia to Boston, Massachusetts.  This is the most densely populated area of the United States.  Storm surges of 1.2 to 2.5 metres are currently expected from the Delmarva Peninsula north to the coasts of Connecticut and Rhode Island.  That’s a big enough storm surge to flood a one story home.

Heavy rain, wind gusts up to 120 km/h, coastal flooding and beach erosion are all expected.  Further inland where you have mountain ranges, heavy snow is expected.  Up to 30cm of snow is possible.

One of the biggest impacts will be widespread, long lasting power outages.  Power outages that could affect the US Presidential election a week from Tuesday.

Hi Howard. Some media reports are saying this is ‘a rare Behemoth Storm’. What does that mean?
Sounds like it’s a bit of a wild card in regards to path and intensity?

Yes, it is rare and a monstorous.

One of the things that makes it rare is that it almost like two storms in one.  At the centre, you have a tropical low feeding off the warm ocean waters.  Wrapped around it, you have a extra-tropical low.  A low that feeds off of temperature differences.

The two are combining to make a storm that will affect a HUGE part of the US and not just the coastal sections.  It will affect many people well inland.

Another issue is they way this storm is moving in.  The expected track will send huge storm surges right into the most populated areas of the US, including NYC.

The strongest winds are likely to whipe through NYC as well.  This could break windows in skyscrapers amongst other types of damage.

The storms track is becoming clearer each day.  The European model has been the most consistent over the last week and now the American GFS model is coming into agreement with it.