Sandy: What you need to know 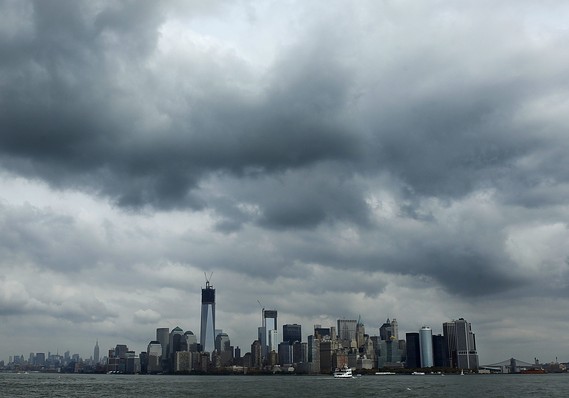 Sandy has been labelled a megastorm and below is a summary of what damage she could bring to the US.

Ocean water pushed onshore by the hurricane will likely cause the most destruction. A storm surge from two to four metres is forecast to swamp New York City, which could overtop the city’s levees and flood the subway system. It is possible areas from New Jersey to New York City and Long Island have some of their worst coastal flooding on record..

High winds: Wild winds of up to 140kph will likely knock out power to millions of people in the Mid-Atlantic and Northeast.There is the potential for tens of thousands of trees to be downed and millions of utility customers could be without power. A power outage computer model run by Johns Hopkins University predicts that 10 million people will lose power from the storm.

Rainfall: Rainfall amounts of 100 to 200mm are expected over portions of the Mid-Atlantic States, including the Delmarva Peninsula, with isolated maximum amounts of 300mm possible. The rain could lead to river flooding in Maryland, Delaware and Pennsylvania. Masters predicts that river flooding from Sandy will cause just under $1 billion in damage.

Snowfall: Forecasters say that some spots in the mountains of West Virginia have the potential to receive up to more than half a metre from the storm as rain from Sandy collides with cold air moving into the region.

Overall: Total damage (including loss to the U.S. economy) will be worse than Katrina and Sandy may cause more than $100 billion in damage.

I’ve been checking, but it seems that the organisers of the New York Marathon in a few days think it will go ahead. What is your view?