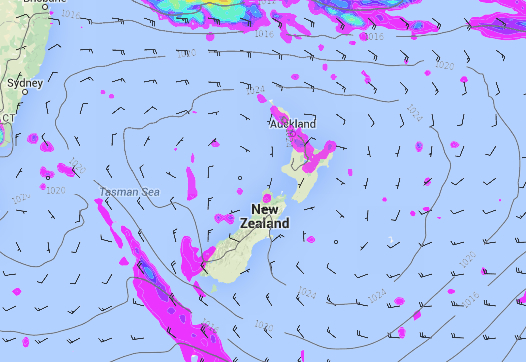 Those two anticyclones which dominated the calm, settled weather today are still centred either side of NZ.
A ridge is bridging them over the upper North Island, while the lower North Island and rest of the South Island sits under a westerly airflow.

For the North Island itâ€™s mostly sunny for everyone, with light winds in the morning and afternoon sea breezes, while there’s northerlies for much of the day in Wellington.
Some cloud builds up about the Waikato and inland BOP northwards again, but there’s only a low risk of an isolated shower this time – mainly dry weather looks more likely.

For the South Island, it’s looking sunny in the east with easterly quarter winds, perhaps tending southerly for a time in Canterbury, from Banks Peninsula south.
The West Coast is sunny too with westerly winds, though it will be cloudy in Fiordland, with the odd light shower by midday, turning into evening rain.

Southland and Otago are mostly sunny, with some developing high cloud and easterlies about coastal Otago, and west to northwest winds elsewhere.
And a southwest change moves into Southland late afternoon and evening, bringing showers.
Later in the evening and then overnight, a few showers move into Otago.