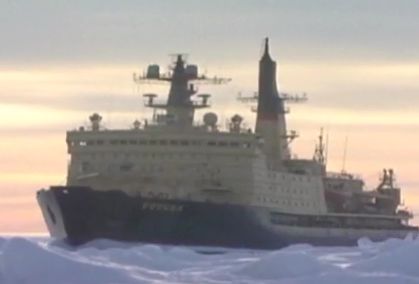 But now the frozen seas of the Arctic are being opened up; its vast riches unlocked.

The Yamal is one of Russia’s biggest, most powerful icebreakers, and one of the few ships in the world capable of cutting through the thick Arctic pack ice.

It does it for one reason: to clear a path for other vessels, so they can take advantage of the frozen Arctic.

Escorted by icebreakers, cargo ships and oil tankers crossing the Arctic can shave thousands of miles off a journey between Asia and Europe, saving fuel, and vastly reduce their carbon emissions.

Captain of the Yamal, Alexander Lembrik says the Arctic’s untapped potential is the reason behind the dramatic increase in maritime traffic.

There are more and more transport vessels, through routes for ships from Europe towards the Bering Strait in the North Pacific

He is concerned that an increase in traffic in the region could have a damaging ecological effect on the Arctic.

“You can’t deny that possibility but if you take all the precautions, this is avoidable,” Lembrik said.

With a water purification plant and waste disposal system, the crew of the Yamal say the ship’s own ecological impact is minimal.

It’s also nuclear powered which means low carbon emissions, but, of course, it’s a risky polluter if anything goes wrong — just one of the many paradoxes of Arctic ecology.

Take, for instance, the problem of global warming caused by greenhouse gases.

It is believed to be melting the polar ice caps, making the Arctic waters even more accessible to shipping, slashing journey times. But it’s also opening up the region to exploitation for its oil and gas reserves.

And as the traffic in the Arctic increases, so too will the need for icebreakers like the Yamal.

And not just for clearing routes — navigating Arctic waters can be treacherous. An incident in January saw several fishing boats trapped in the ice.

It was an icebreaker like the Yamal that broke them free.

“As a rule, when the traffic along the Northern Sea Route is organized well, emergencies don’t happen,” Lembrik said.

“It’s when there are errors in the organization that some ships could find themselves in difficult situations. With the increase in freight turnover there will be a larger number of ships that will need icebreaker assistance.”

For their critics, Russia’s fleet of icebreakers are hastening exploitation of the Arctic.

But without capable vessels like the Yamal, these frozen waters may be even more exposed to risk.