Russia declares day of mourning as flood tolls climbs over 170 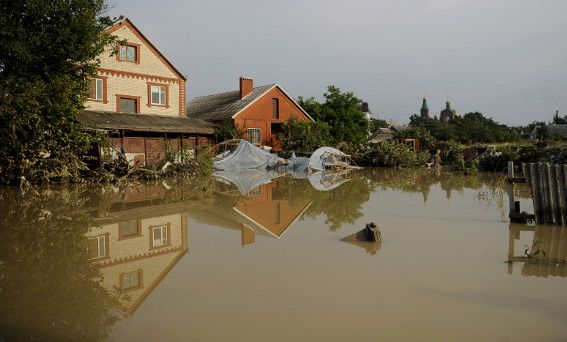 Russian President Vladimir Putin declared Monday a national day of mourning in the wake of devastating, raging floodwaters that tore through streets in the southern part of the country and killed more than 170 people, according to Russian media reports.

A Russian interior ministry spokesman told the official Itar-Tass news agency late Sunday that 171 people died due to the floods.

A vast majority of these deaths — 159, according to the interior ministry — were in and around Krymsk, a city of about 57,000 residents where torrential rains spurred waters to surge 7 meters (23 feet) as people were sleeping Friday night. Another 10 died in Gelendzhik district and two in the Black Sea port of Novorossiysk, Itar-Tass reported.

“People just ran from their homes because there was a huge wall of water,” one woman told the Russian News Service, a Moscow-based radio station.

In addition to the dead, another 320 people sought medical assistance — 104 of whom required hospitalization — the emergencies ministry reported, according to state-run RIA Novosti.

The day of mourning also will remember 14 Russian pilgrims headed to a Ukrainian monastery who died Saturday after their bus swerved off the road and crashed into a ditch in an accident that was not flood-related, state-run media said. Twenty-nine people survived that crash.

Yet the higher toll, and the greatest controversy, involves what has happened in recent days in Russia’s Krasnodar region near the Black Sea.

One driver, according to the English-language Russian news channel RT, said his truck was pushed tens of meters by floodwaters, while the force of the floodwaters ripped a 10-year-old girl out of her mother’s arms.

Five people in the seaside resort town of Gelendzhik were electrocuted after power lines collapsed into the water. RT, citing witnesses, said a man trying to cross a large puddle was initially electrocuted, and then four others who tried to come to his aid were then killed by the live electrical current.

Those not harmed, but living in the flood-ravaged area, still face plenty of challenges such as no electricity, a disrupted water supply, damaged roads and faulty communication. RIA Novosti reported more than 5,000 homes were flooded, while Itar-Tass said 254 had been destroyed.

“The scale of it is spectacular, to be sure, and very tragic. The water came with such force that it tore up the asphalt,” Krasnodar Gov. Alexander Tkachov said via Twitter after seeing pictures from Krymsk, according to RT.

Even with the prospect of more rains and floods on the horizon, officials have begun making promises to the roughly 20,000 people most affected.

That includes payouts starting Monday of 10,000 rubles (U.S. $304) to each person whose home has been destroyed, reports RIA Novosti. And Tkachov vowed at a public meeting that the government will “build … a new home for you in three to four months, before the beginning of the cold period,” according to the same report.

The U.S. government has also vowed support, with a statement on the U.S. Embassy of Moscow’s Facebook page saying Washington is “ready to help the Russian government” as it spearheads the recovery effort.

A criminal investigation has been launched by Russian authorities to look into whether there was negligence on the part of any officials for failing to warn residents of potential flooding, RT reported.

Russian Emergencies Minister Vladimir Puchkov has said the flood’s cause was “not technical,” according to Itar-Tass. This report quoted Russian Investigative Committee spokesman Vladimir Markin as saying “there were no mass water releases or overflow over the dam” from the Neberdzhayevskoye Reservoir.

The Krasnodar region isn’t the only one in Russia to be affected by powerful storms. An emergencies ministry spokesman told Itar-Tass that about 166,000 people in Chechnya were powerless due to a combination of heavy rains and strong winds.

– View photos of the floods by visiting the CNN page here