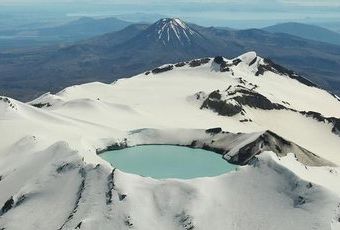 Increased rumblings under Mt Ruapehu and a warmer-than-usual crater lake have led authorities to raise alert levels for planes flying over the area.

A volcanic eruption is not imminent – the alert level remains at one out of five – but volcanologists say there are subtle signs of unrest under Ruapehu, which last erupted in 2007.

An aviation warning level introduced in November has been raised for the first time to yellow – the second-lowest on a four-tier system. The alert is a precaution, as few international flights travel near Ruapehu.

“The crater lake is a fairly big puddle and if you can heat that up to 40C, it takes a fair bit of energy.”

On March 1, it reached 41C, just 1.5C off the highest temperature since the lake was re-established in 2002.

As well, GNS observed changes in the lake’s chemistry with greater amounts of magnesium detected. This suggests water in the lake has come into contact with fresh surfaces of molten rock.

Higher levels of carbon dioxide measured in the lake also point to molten material under the volcano.

The frequency of seismic activity 6km under the volcano has increased since December. Mr Scott said 12 small quakes had been detected this year, about three times more than normal.

The volcanic warning level would only be raised if there were large shifts in several indicator areas or if small-scale eruptions occurred, Mr Scott said.

“There’s no one trigger; it’s usually a combination of things such as big changes in deformation, chemistry, heat flow and earthquakes.”

Ruapehu’s 2007 eruption lasted for seven minutes and caused two lahars, one of which spilt into the Whakapapa skifield. It also produced a column of ash and a rockfall which seriously injured one person.

It is an active volcano, meaning eruptions can occur with little or no warning.

The only other volcano in New Zealand on alert level one is White Island.

This was the injured person with front row seats of the 2007 eruption: http://www.williampike.co.nz