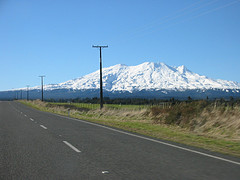 Prime Minister John Key says he was made aware a few days ago that there was increased activity on Mt Ruapehu.

GNS Science revealed today the likelihood of the volcano erupting over the next few weeks had increased.

Duty volcanologist Steven Sherburn said changes in measurements over the last few weeks indicated eruptions are “more likely over the next weeks to months”.

“We’re monitoring Ruapehu closely, but it often doesn’t give any immediate warning that it’s going to erupt,” Dr Sherburn said.

“This suggests the vent is partly blocked, which may be leading to a pressure buildup beneath Crater Lake. A sudden release of the pressure may lead to an eruption.”

As a result, the Aviation Colour Code has increased from Green to Yellow. Code Yellow indicates a volcano is experiencing signs of elevated unrest above known background levels.

Mr Key said he was advised a few days ago there was some movement and an increase in temperature on the mountain.

“I haven’t had any advice today on that issue but they did alert me a couple of days ago it might be an issue,” he said.

NS said small earthquakes have been occurring about 5km beneath the summit area of Ruapehu since late October, but these may not be directly related to the high temperatures beneath Crater Lake because the heat is much deeper.

A build-up of pressure beneath Crater Lake is thought to have caused the 2007 eruption and a smaller eruption in 2006.

Mt Tongariro burst into activity in August this year, when the Te Maari Crater erupted.

The eruption caused a landslide which flowed 2km down the mountain and blocked three streams, creating a dam in one of them.

The dam broke last month, sending a lahar down the mountain.