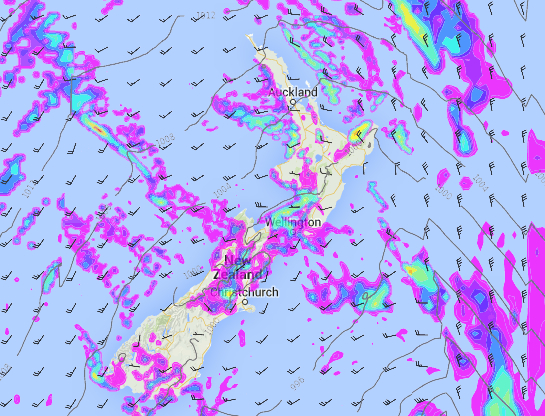 It’s going to get pretty hairy in places today – as several systems are going to influence conditions around the country in the form of both rain and wind.

A front is moving across the country, preceded by a strong northeasterly airflow, meaning gales for many places – pretty much anywhere exposed across the North Island.
Those winds then change northwest as the front moves through in the afternoon – so from early to mid afternoon it will affect the west, and later on the east.

Rain with this front will be heavy in the west, places from Auckland down through to Taranaki look like good candidates for some heavy rain activity, but that could well spread right out.
There’s a strong chance of thundderstorms, especially for Taranaki – as well as the conditions ripe for forming a small funnel cloud or tornado at some point.
This is just a risk though, the wind shear looks similar to occasions where we have seen tornadoes in the past in the region.

In the South Island, heavy rain is possible about the top of the island, for the Tasman, Nelson and Marlborough areas, then easing this afternoon and into evening.
There looks to be some reasonable rain moving into Canterbury too – there’s a chance of heavy falls, but may be more of a help rather than a hindrance – especially in the South Canterbury region.

Auckland has a risk of thunderstorms mid to late afternoon as this front moves through – though again, at the moment it’s just a risk – we will update things as the progress – so keep an eye on our twitter page which is much quicker for us to update.

There is the chance of a small tornado on this front also – with similar wind dynamics as in Taranaki – but right now something is looking more likely further south in the island – if at all.

Hi Guys. At last a good soaking rain here at Waipu. Our ground was crying out for this as we have had only 258mm so far this year to date. Certainly most welcome. Sorry to the people who want sunshine all the time but we literally can’t live without the wet stuff.

Good stuff! Finally some rain for our forests, parks, pastures and gardens that so many people will be pleased with. Has been an unbelievably long, hot and dry summer.