Rough end to the week 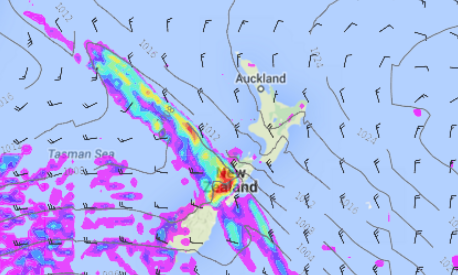 Gales are coming back – in the form of a very strong nor’wester developing this Thursday in the South Island and spreading into the North Island by Friday.  Rain, heavy at times with isolated thunder will spread northwards up the West Coast.

Wind warnings may be issued as a result of this fairly standard spring front.

The first half of November was fairly settled, but the second half is proving more ‘spring like’ with strong wind events and thunderstorms appearing.

Rain will spread up the North Island’s west coast on Saturday – although may weaken before it heads north of Auckland.  But Saturday might be a cloudy,wet, day for many central and western areas of the North Island.

Sunday across New Zealand looks calm and much drier thanks to high pressure.  The high lingers across Sunday, Monday and Tuesday for the North Island – but the nor’west winds and rain return to parts of the South Island by Tuesday.

December 1st – next Tuesday – is recognised by most New Zealanders as the start of summer, but this year expect spring conditions (fuelled by El Nino) to continue for longer into December.

A fairly settled first half of November!