Ring a ding ding, did someone call a high? 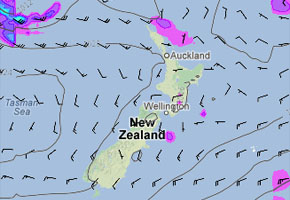 Well even if the spirit of Frank Sinatra didn’t an anticyclone is likely to sit in the Tasman Sea for most of this week providing settled weather which is rather welcome, although Bay Of Plenty by the sounds of things does need some rain.

As always conditions are not perfect everywhere, a fairly weak southwesterly front will move northwards over the South Island tonight and pass out to the east of the North Island later tomorrow. Southland through to Canterbury may see a few coastal showers clear in the morning, then Marlborough could see a few in the afternoon and finally Wellington and Wairarapa in the evening.

The odd shower may affect Northland on Tuesday and Wednesday also due to areas of low pressure lurking to the north of the North Island.

Apart from the above mentioned issues Wednesday is looking like a great day for most with light winds and afternoon sea breezes. Morning cloud will break in the east of both islands to mostly sunny weather. In the North Island late southerlies may bring some further cloud to Wellington and Wairarapa. Late afternoon and evening there is the low risk of an isolated shower or two about inland areas of the upper South Island and the Waikato.

Thursday will start to see the high in the Tasman moving over New Zealand as a front approaches from the southwest, expect similar weather as on Wednesday with sunny weather for the majority. Friday looks settled once again although a few showers may move onto the far south of the South Island later in the day as the front in the Tasman nears.