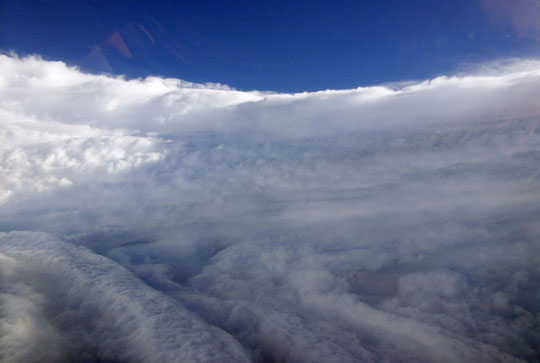 Hurricane Rick is more than a day away from the resorts of Baja California but the 4 metre waves it kicked up have already killed one person in Los Cabos, which lies almost directly in the hurricane’s forecast path.
Francisco Cota, the Los Cabos civil defense director, said a 38-year-old man was standing on a rocky point fishing when he was swept away by one of the big waves Sunday. Bystanders went to help the man, but by the time they got him out of the water he was dead.
“We have established patrols on the beaches to keep people from going into the sea,” Cota said. Storm shelters were being opened at local schools and patrol vehicles were making the rounds of low-lying neighborhoods with loudspeakers urging people to evacuate.
“The port is closed … and people are getting their boats our of the bay,” Cota said.
Hurricane Rick’s maximum sustained winds decreased Monday to near 165 kph, making it a Category 2 hurricane, down from its peak of 285 kph as a Category 5 storm last week, the U.S. National Hurricane Center in Miami said. Rick was moving northwest at about 13 kph.
The hurricane was expected to continue weakening, but could hit or pass just offshore of Los Cabos, at the southern tip of the Baja California peninsula, as a Category 1 hurricane by Wednesday, forecasters said.Rick was centered about 550 kilometres south-southwest of Cabo San Lucas, one of the two towns that make up the municipality of Los Cabos.
At the beach-side SolMar resort in Cabo San Lucas, manager Silvia Carlos said the hotel was taking precautions, but had not evacuated guests.
“We are covering up windows in the entranceway and sealing doors,” Carlos said. “The waves are starting to get high.”
Rick also threatened to disrupt a major sport-fishing tournament scheduled to start Wednesday. About 800 sports fishermen were scheduled to gather for the Bisbee’s Los Cabos tournament.
About 130 boats had been scheduled to set off into the Pacific tomorrow — the day Rick is projected to hit, but tournament organizer Clicerio Mercado said the start of the event would be postponed in hopes fishing could resume Thursday or Friday.
Rick was already whipping Socorro Island, about 500 kilometres southwest of Cabo San Lucas, where about 100 people from the Mexican Navy and other government agencies are based.
The mainland base that commands the detachment said Navy personnel on the island reported heavy winds and waves , but no damage or injuries.
Forecasters said a weakening Rick is likely to continue past the Baja peninsula and slam into Mexico’s mainland somewhere near the resort city of Mazatlan on Thursday.
Rick was the second-strongest hurricane in the eastern North Pacific since 1966, when experts began keeping reliable records, Hurricane Center meteorologist Hugh Cobb said.
The strongest was Hurricane Linda, which generated maximum winds of 185 mph (296 kph) in September 1997.
SOURCE: Associated Press