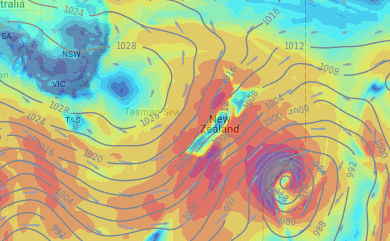 WeatherWatch.co.nz forecasters say the windy weather of late isn’t a ‘blip on the radar’ – it’s a permanent fixture in our winter weather pattern.

Dubbed “Sprinter” earlier this week by WeatherWatch.co.nz the mix of spring + winter weather continues on into this weekend and next week – after a short breather today and tomorrow. In fact, the rest of July looks windy.

“A big high is quickly passing over northern New Zealand across Thursday PM and Friday AM” says head weather analyst Philip Duncan. “That brings a break in the wind and showers then once we get to Saturday we have warmer winds from Australia and the sub-tropics with showers and patchy rain and then overnight and into Sunday a colder, windier, sou’west flow will again spread across all of New Zealand”.

The colder, windier, Sunday change will bring snow to the ski fields in both islands too.

Next week, while not windy for every region every single day, we are seeing a lot of westerly quarter winds with gales in marine areas off and on.  Rain looks most likely in the west while eastern areas look drier.

The final days of July look like another cold sou’west change – but the jury is still out on when the nation might face a significant nationwide southerly this winter. “The strong westerlies in the Southern Ocean are cutting the southerlies off at their knees – meaning the truly cold air around Antarctica can’t escape northwards across the Southern Ocean and into New Zealand” says Mr Duncan.  “It’s a bit like trying to go directly across a very busy motorway without a lane, or over-bridge – so it just sits and waits for a gap in the traffic”.

It’s this gap in the westerlies that could open up the chance for a bigger southerly in August or spring.

As for August itself, well the days are starting to get longer but the coldest weather is often between now and the first half of August, after that brutal cold snaps are definitely still possible but their longevity and severity can be limited due to the faster moving weather patterns in Spring, and the much longer daylight hours we get in September (each weeks gets more than 20 minutes of extra sunlight!)