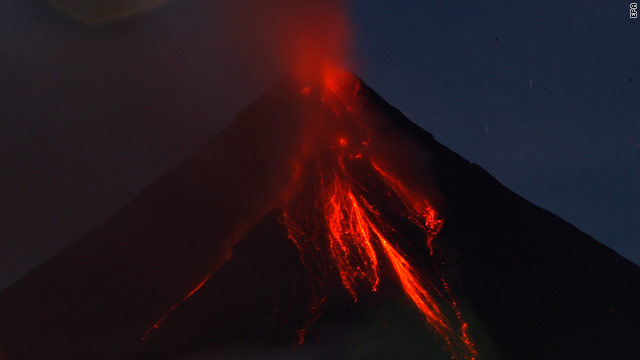 Philippines authorities Tuesday started evacuating about 50,000 people living around the island nation’s most active volcano after it oozed fiery lava and belched clouds of ash.

A large-scale eruption was forecast as imminent.

The Philippine Institute of Volcanology and Seismology raised the alert level up a notch on Monday night to level 3. Scientist Alex Baloloy told the Philippine News Agency (PNA) that under level 3, “a full-blown eruption is expected to take place within weeks to days.”

He said seismic instruments detected 83 volcanic quakes, a majority of which were tremors associated with rockfalls.

People in Albay province, about 466 kilometers (290 miles) south of the capital, Manila, flocked to town centers to catch a glimpse of glowing lava cascading down the slopes of Mayon. The volcanic mountain soars 2,464 meters (8,077 feet) into the sky and has erupted 49 times since the first documented erupted in 1616.

Ash fell on the town of Guinabatan, prompting its mayor to predict an unwanted sort of white Christmas, PNA said.

The Albay Public Safety Emergency and Management Office said 9,946 families or 47,285 people were expected to be moved to safer ground within 72 hours, PNA reported.

Salceda, who canceled a planned trip to Denmark for the global climate conference in Copenhagen, said he will meet with the provincial disaster coordinating council Tuesday to discuss emergency measures in case of an eruption, according to PNA.

The Philippines is situated in the so-called Ring of Fire, an arc of fault lines circling the Pacific Basin that is prone to frequent earthquakes and volcanic eruptions. Mayon’s most violent eruption, in 1814, killed more than 1,200 people and devastated several towns. Its last major eruption was in 1993.

Since then, it has emitted ash and spewed lava but remained restless.

Hopefully not another pinatubo,It wrecked our summer twice for more than a year in 1991 and 1992.It will definitely cool the planet down and the planet will be in peril for runaway cooling.

Amazing image of the forces of nature. I did like the sense of humour of the Mayor of Guinabatan,
as he predicts an unwanted sort of white Christmas.