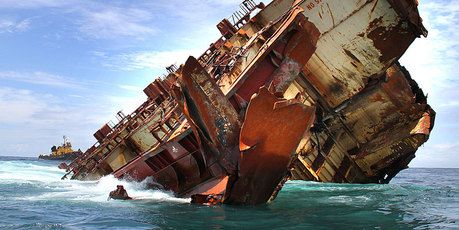 The captain of the Rena was just 2.6 nautical miles from the Astrolabe Reef when he first saw it on the radar – but assumed it was a small vessel or radar clutter.

Crown solicitor Rob Ronayne said the crew made a catalogue of errors while racing to the Port of Tauranga. The ship cut corners and sailed hazardously close to other landmarks such as Bull Rocks and Arial Rocks and the captain and navigational officer tried to cover up their faults.

Crown solicitor Rob Ronayne said there were “substantial deviations” from the approved passage plan without just cause.

Most seriously, he also said that the captain instructed the navigational officer to later plot a false chart position at 2am on October 5 – 15 minutes before the Rena ran aground – so that it gave the appearance of the Rena passing clear of the Astrolabe Reef.

When interviewed on October 11, neither man mentioned falsifying the charts.

The captain admitted when re-interviewed the following month that he intended to mislead investigating authorities and to cover up what he perceived to be the navigational officer’s shortcomings.

Both the captain and navigation officer have pleaded guilty to a charge under section 65 of the Maritime Transport Act in relation to operating a ship in a manner causing unnecessary danger or risk to persons or property.

The captain has also admitted a charge under the Resource Management Act of being the master of a ship from which harmful substances or contaminants were discharged into the coastal marine area, and also to four charges under the Crimes Act of wilfully attempting to pervert the course of justice.

The navigation officer has also pleaded guilty to three similar charges, which relate to altering ship documents after the grounding, and a charge under the Resource Management Act relating to the discharge of harmful substances and/or contaminants.

The men are expected to be sentenced this afternoon.

The Rena’s owners, Daina Shipping Company, who are also facing prosecution under the Resource Management Act, were also called but the matter was adjourned to July 18, with no plea entered.

Bad weather and stormy seas have gradually smashed Rena to pieces since it ran aground on October 5 last year.