Remnants of a cyclone – Situation & outlook for Wednesday 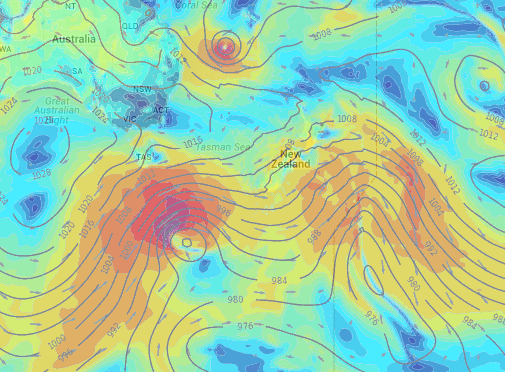 On Wednesday a weakening ridge lies over the far north, and a northwesterly airflow strengthens over the rest of the country.
This is all ahead of a front, which moves northwards over the South Island during the day, then moving onto the lower North Island later in the evening and overnight.

Meanwhile, a frontal system stretching out from what will be a weak (perhaps ex) tropical cyclone Ola moves onto Northland in the late afternoon,  then further south over Auckland overnight.
While associated with Ola, it will perhaps just bring some welcome rain / showers.

Rain will once again make its presence felt on the West Coast of the South Island, there will be heavy falls at times, as a frontal system moves northwards.

About Southland and Otago, winds will change strong west to southwest in the morning – bringing rain or showers.
While about Southland showers could be heavy with thunderstorms and hail, for coastal Otago showers are mainly just in the morning, with sunny areas developing after lunch.
Winds will remain gusty for the afternoon about coastal Otago however – from the west.

For Canterbury, northwesterly winds stengthen in the morning, with gales possible about Mid and more so North Canterbury from late morning and into the afternoon.
Winds change southwest in the afternoon, bringing some cloud and the risk of a shower or two.

Marlborough is mostly sunny with strong northwesterlies developing around midday, and the risk of gales at times. Some cloud and a few spots of rain are possible in the evening too.

Most of the action is down south, with the East Coast of the North Island in for a pretty good day, warm temperatures and gentle northwesterly winds.
Only the Wairarapa may get gusty northwesterlies from afternoon.