Home > News > Rehearsal to save the earth from asteroi...

Rehearsal to save the earth from asteroids 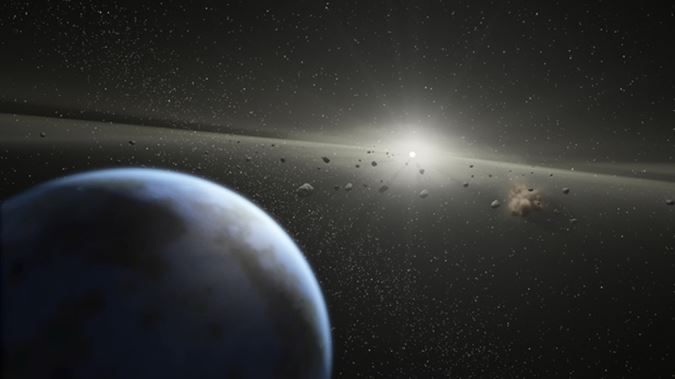 Scientists are to attempt to nudge an asteroid out of its orbital path in a practice run for saving the world.

The joint US-European AIDA (Asteroid Deflection & Assessment) mission will crash a probe into the smaller of a pair of binary asteroids to see if the object’s path can be altered.

Although the egg-shaped target, known as “Didymoon”, is only 160 metres wide, the test will show if in principle a much larger asteroid threatening to wipe out human civilisation can be deflected the same way.

Two spacecraft, one to smack into the rock and the other to monitor the effect of the impact, will be launched in October 2020, scientists were told at the European Planetary Science Congress in France.

They are due to rendezvous with Didymoon and its 750-metre-wide partner Didymos in May 2022.

“To protect Earth from potentially hazardous impacts, we need to understand asteroids much better – what they are made of, their structure, origins and how they respond to collisions,” Dr Patrick Michel, lead investigator for the European Space Agency half of the mission, said.

“AIDA will be the first mission to study an asteroid binary system, as well as the first to test whether we can deflect an asteroid through an impact with a spacecraft.”

DART will fire the probe into Didymoon, which orbits diamond-shaped Didymos every 12 hours from a distance of 1.1 kilometres.

AIM will measure properties of Didymoon such as its mass and density and deploy a small lander to investigate the object’s internal structure.

In October 2022, AIM will move out to a safe distance to observe DART hitting the asteroid and record any changes in orbit.