Red sky in the morning? There’s some truth to that warning… (+6 photos) 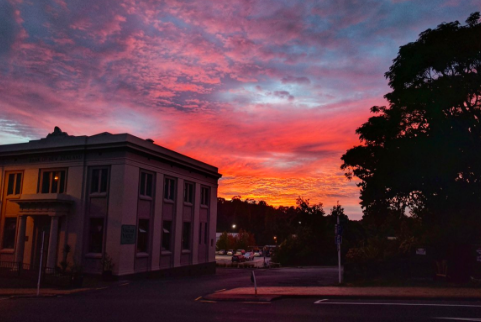 WeatherWatch.co.nz was inundated this morning with photos of a very red sky across parts of the country, especially Auckland.

As high cloud thickens over New Zealand today the rising morning sun way out to the east lit up those clouds…briefly. In fact the window for the sun to shine through a gap in the clouds to the east of the country was short lived, but it was spectacular.

So is that saying true? Red sky in the morning Shepherd’s/Sailor’s warning?  Yes – partially.

It’s pretty simple to explain. Our weather mainly comes from the west and the sun rises from the east.  As the sun rises low in the horizon to the east it briefly lights up the skies over us.  The saying ‘red sky in the morning’ is a warning because it indicates something is brewing to the west and is moving in.

Likewise red skies at night being “delight” means if you can see a big bright red sunset and it lights up the clouds over you then the weather to the west (where the sun is setting and where our weather is often coming from) is clear. The red sky at night highlights the clouds should be clearing and improving weather is coming. If more bad weather was coming then chances are you wouldn’t see the sunset, there would be too much cloud.

It’s not always reliable though – but back before computers and satellites it was a good way to judge whether bad weather was coming or going.

And in today’s specific example? Yes, it’s accurate – a very large low is in the Tasman Sea and a southerly is moving up the country as a northerly spreads south, both bringing rain.

Oh and why the extra red/orange look? Again simple – as the sun first rises or is just setting the sunlight we see has to go through much more of earth’s atmosphere then when it’s directly above us. It’s this thick layer of atmosphere that gives it that very warm, spectacular look….especially when it hits the gloomy grey sky above you.