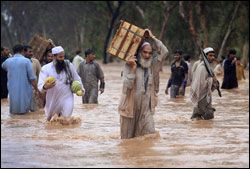 More than 1,100 people are reported to have died and more than 2 million people badly affected by the severe floods that have been sweeping through large areas of north-west Pakistan.

In the past few days, torrential rains have breached flood defences and caused many rivers to burst their banks. The Pakistani authorities and the Pakistan Red Crescent Society, supported by the International Red Cross and Red Crescent Movement, have mounted a major rescue effort to reach thousands of communities that have been totally cut off by raging torrents of water.

The worst hit area of the country has been Sibi in Balochistan where the flooding first began ten days ago. Over the last three days, other areas have faced a similar deluge – Rajanpur in Punjab, Dera Ismail Khan in Khyber Pakhtoonkhwa, Gilgit and Neelum in Gilgit-Baltistan, and Azad Jammu and Kashmir. The Pakistani authorities believe these to be the worst floods to have hit the country in the past 80 years.

The severity of the flooding has caused enormous damage to the country’s infrastructure in both rural and urban areas. Entire settlements of mud-brick houses are reported to have been swept away, major bridges have collapsed, and some major provincial cities have been totally cut off after road and rail links were severed. The widespread disruption to the country’s communications network has meant that reaching the worst-hit areas of the country is extremely difficult.

The situation in many areas is expected to worsen with more rain forecast for the next few days.

The Pakistani meteorological office is also forecasting heavier rain than usual during this year’s monsoon season and the country’s major rivers, including the Indus, Jhelum and Kabul, are expected to reach dangerously high levels.