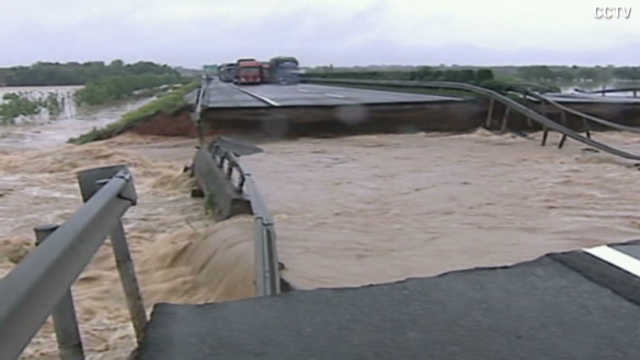 Heavy rain and flooding have exacted a high toll in China this year, and Friday the country faced a new threat from a swollen Yangtze River dam that was dangerously close to capacity.

The water level reached its peak at the huge Three Gorges Dam, built to tame the worst floods, reported state-run Xinhua news agency. Floodgates on the dam have been opened to control the flow, and pictures from the scene show massive volumes of water gushing out.

The water, steadily rising since Tuesday, rose to 159 meters (more than 520 feet), about 14 meters (46 feet) above the reservoir’s water-releasing level, engineers in Yichang City told Xinhua.

They recalled the massive floods of 1998 when the banks collapsed and water topped houses in Mianchuan. More than 4,000 people died in that disaster.

Floods this year have been the worst since then, affecting 120 million people in 28 provinces and claiming 742 human lives. They have caused $22 billion in economic losses, including the collapse of about 670,000 homes, Xinhua said.

A recent series of severe storms has exacerbated the situation.

The latest, Typhoon Chanthu, the third typhoon of the West Pacific season, weakened Thursday as it made its way over land but dumped more rain in an already inundated region.