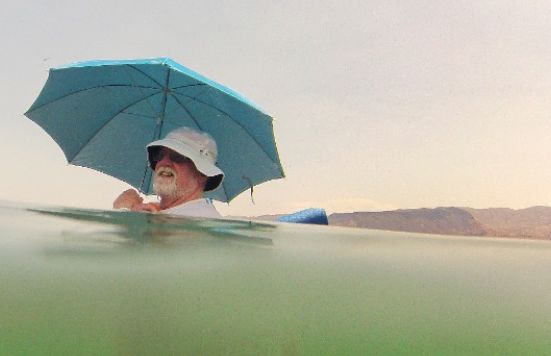 Death Valley resident Mike Wood says he’s used to the heat. But when his running shoes begin to melt, he starts to pay attention.

“The ground temperatures here can approach a hundred degrees so you’re talking about pretty much boiling the shoes … everything that kind of holds the shoe together kind of comes apart,” Wood said.

Wood hit the pavement running despite temperatures that hit 127 degrees on Saturday — the hottest point on Earth for the day. The National Weather Service is predicting another high near 127 (53 degrees C) for Sunday as a record-setting heat wave bakes the Southwest into the work week.

Civic and emergency officials throughout the Southwest say if there was ever a time to worry, this would be it. The reason isn’t just the oppressive heat that is plaguing the region: It’s the fact it is expected to hang around, and possibly even get worse, over the next few days

The heat may have led to the death of an elderly man in Las Vegas. Paramedics found the man dead in his home, which did not have air conditioning, Las Vegas Fire & Rescue spokesman Tim Szymanski said.

He died of cardiac arrest and the heat may have contributed to his death, although the coroner will make the final determination, Szymanski said.

Paramedics also responded to two “very serious heat related medical calls” on Saturday, even though the victims had air conditioning in the home or car, Las Vegas Fire & Rescue tweeted.

The heat wave comes just a couple weeks before the 100th anniversary of what the National Weather Service calls the “highest reliably recorded air temperature on Earth” — 57C degrees on July 10, 1913, in Death Valley’s Greenland Ranch.

The valley is consistently deemed the hottest location in the world because of its depth and shape. It has one of the world’s lowest elevations and also serves as one of the driest locations in North America. Its 11,000 foot surrounding mountain range traps and radiates heat down into it.

Despite the extreme heat, Death Valley’s National Park Service says several animal species thrive in the severe climate because of its great range in elevations. Coyotes, bats, and bobcats are among the 51 species of native mammals there. The valley also has more 30 species of reptiles, such as the desert turtle and lizards.

At the aptly named Furnace Creek, in Death Valley National Park, the heat will stay on full blast through Tuesday at the earliest. Nighttime lows will drop to about 36C degrees.

“We have more work than we can handle,” said Max Ghaly of Cathedral City Air Conditioning and Heating in Palm Springs, California. “We’re running all over the place trying to do what we can.”

“I’m not worried as much about the people who have lived here a while,” said Sgt. Troy Stirling, police spokesman in the Lake Havasu, Arizona, near the California state line.

“It’s more the tourists coming into the area, even from Southern California, who aren’t used to this kind of heat.”

US Airways had to cancel 18 flights Saturday due to the heat, spokesman Todd Lehmacher said. He said planes are certified for takeoff up to 48 degrees, but the temperature crept just over to 48.3C degs in Phoenix.

The National Weather Service issued an excessive heat warning for large parts of California, Nevada and Arizona, and a heat advisory for other parts of Nevada.

Many of the excessive heat warnings extend through Tuesday night. Starting Wednesday, temperatures will drop by a couple of degrees, moving closer to normal temperatures.

“It’ll still be hot, but not as intense as we’re seeing now,” said Chris Stachelski, a meteorologist with the National Weather Service in Las Vegas

Forecasters say temperatures through the weekend could rival a 2005 heat wave that killed 17 people in the Las Vegas area.

Even dusk won’t provide much respite, as temperatures might not drop below 32C degrees in many places, even in the middle of the night.

“The No. 1 thing is to absolutely know your limitations and to stay hydrated by drinking plenty of water,” Stachelski advised those coping with the high temperatures.

He recommended limiting time outdoors. For those who have to do any strenuous activity outside, he advises doing it in the early morning, evening or simply putting it off until the end of the week when the temperatures are lower.

Heat stroke symptoms include hallucinations, chills, confusion and dizziness, along with slurred speech.

To protect against heat stress, the CDC advises spending time in air-conditioned places, staying informed of heat warning and drinking lots of fluids.

The pic looks like McDavitt helping look for Nina crew!