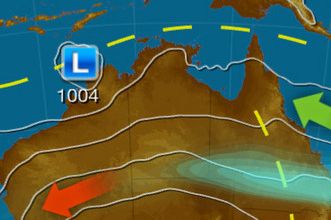 A tropical low embedded within an active monsoon trough has been drenching the Kimberley and Top End with record April rainfall.

The Kimberley district has seen the heaviest rain within the past 24 hours as the tropical low lingers off the west coast. Areas around Derby were awash with as much as 150mm.

Curtin received 148mm in the 24 hours to 9am today, which makes it the wettest April day in at least 16 years. Derby itself picked up 64mm, its heaviest April rainfall in 26 years of records.

The monsoon trough, which extends right across the northern tropics, has also been delivering heavy rainfall to the Darwin-Daly and Arnhem districts.

Pine Creek received 119mm in the 24 hours to 9am, their heaviest April rain in five years. Milingimbi picked up another 99mm, which now brings their total to over 600mm for the last week and a half.

The monsoon trough will edge further north over the next few days, which will allow the totals to drop.