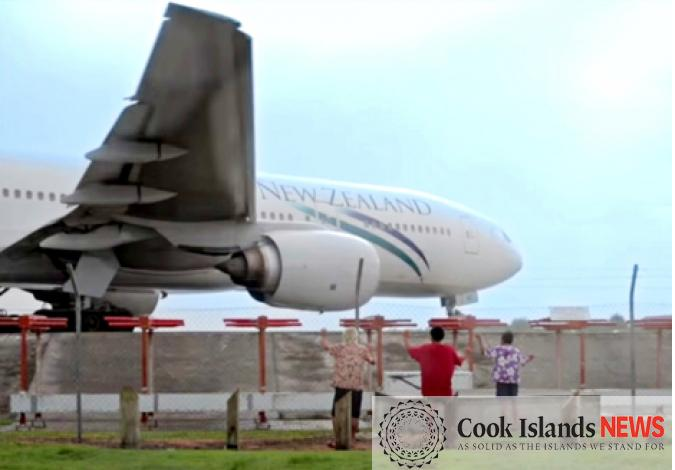 Three tourists have been discharged from hospital after sustaining injuries at the jet-blast area on the inland end of Rarotonga International Airport’s runway.

The tourists were all taken to hospital in an ambulance last Thursday after been blown over while watching an Air New Zealand Boeing 777 take off.

Witnesses say the air blast from the take-off was so strong that it threw the tourists to the ground injuring two of them and knocking one unconscious.

Island resident Larry Price, who told CI News about the incident, says warning signs at the area aren’t clear enough for the public to see.

“I don’t believe there is adequate protection for the public on the Nikao side of the runway.”

Firstly, he says, there is no blast screen and secondly, while there are warnings signs on the fence, there are none on the road.

Price says strong jet blasts in this area blow well beyond the road, which creates a safety issue.

“I do know that it is a popular place for young people to go and they ‘surf’ off the fence and hang on for dear life when the planes take off.”

Price says it is exciting for people who go to the runway end at the sea wall to watch planes come and go, because there aren’t many places in the world where you can go and get that close.

This seawall side is safer because it’s higher up and the blast from the jets’ engines goes well above people’s heads, Price says.

“So it’s pretty exciting in that way, but the Nikao side of the runway is just dangerous and no place for people to be standing.”

Airport Authority chief executive Joe Ngamata, says there are signs which give people fair warning of the danger posed by the jet blast.

“We don’t have any control over people going on public roads, but the signs are all there in red,” he says.

Ngamata says he understands that tourists see it as something fun to do, but some don’t realise the danger it involves.

“People just need to be careful when a jet is taking off, and it would be better for them not to cross at all until the blast has gone.”

The thrill of holding onto the fence during a jet blast was included in a recent marketing video for Cook Islands Tourism.

But destination development director, Metua Vaiimene wants to stress that it was used in the video for the humour of it, and not to advertise it as a tourist attraction.

Vaiimene says they do not want to encourage people to stand at the areas around the airport which are unsafe, and urge people to take note of the warning signs.