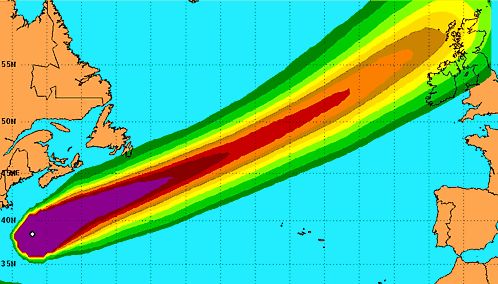 It started off as Hurricane Katia – and was potentially heading to the eastern United States hot on the heels of Irene.  But Katia turned before it reached the US and instead is racing across the mid-Atlantic towards Ireland, Scotland and parts of England.

Katia remains a category 1 hurricane with sustained winds near 140km/h.  But this evening NZT Katia will weaken by 20km/h which means she will lose her hurricane status and becoming a tropical storm.  However compared to the scale we use in the South Pacific, Katia would still be a category 1 Tropical Cyclone – showing that she still is packing some punch.

The UK Met Office is unsure about Katia’s affect on the British Isles and are advising all residents across the UK, but especially Ireland and north west Scotland, to be vigilant of warnings.

Katia remains fairly close to the eastern United States and still has some travelling to do.

But the storm could bring severe gales, huge seas and flooding rains.

Tropical Storm Katia is not expected to directly hit London or southern England but could still bring gales and heavy rain.

ATLANTIC TROPICAL TROUBLE CONTINUES
Meanwhile two other tropical storms are causing problems around the Atlantic and Gulf of Mexico.

Tropical Storm Maria is about to hit the eastern Leeward Islands while Tropical Storm Nate is heading towards Mexico.  Both would be equivalent to a Category 1 tropical cyclone in the South Pacific.

It’s almost a certainty that the storm will just be a regular mid-latitiude cyclone, albeit a strong one, by the time it gets anywhere near the British Isles and will most definitely not be a ‘tropical storm’.

It’s actually not that unusual for the UK to get hit by ex-tropical cyclones/storms carried across the Atlantic by the Jet Stream.