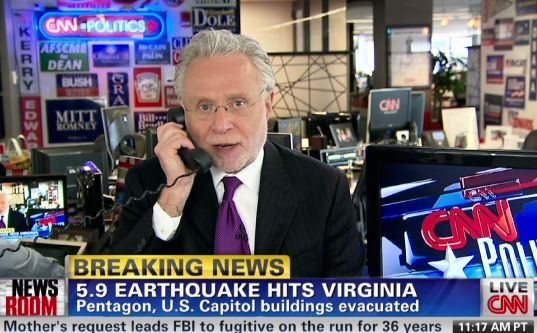 CNN takes an indepth look at today’s rare eastern US earthquake, latest damage reports and which buildings were evacuated. The quake meausred 5.8 and was just 6kms deep in an area that rarely receives strong earthquakes.

An earthquake with a magnitude of 5.8 made buildings and residents tremble from the Carolinas to New England Tuesday afternoon. No major injuries were immediately reported from the quake, which closed monuments and parks in the nation’s capital and sent shock waves up and down the East Coast.

“It’s one of the largest that we’ve had there,” said U.S. Geological Survey seismologist Lucy Jones.

VIDEO: Watch our very own Philip Duncan talk about this morning’s historic earthquake, where it was centred and felt – and why it was felt over such a large area

The quake, which struck at 1:51 p.m., was shallow — just 6kms deep — and was located 88 miles southwest of Washington and 58 miles northwest of Richmond, Virginia, the USGS said. The magnitude was initially reported as 5.8, then revised to 5.9, and then revised again back to 5.8.

Minor damage was reported in a few Virginia counties.

Laura Southard of the state Emergency Operations Center said light structural damage was reported in Culpepper and Orange counties, but there had been no reports of injuries in the state.

The North Anna nuclear power plant, which is the plant closest to the epicenter, was shut down and in a safe condition, a company official reported. There has been no release of nuclear material, Reidelbach said.

Mineral resident Desi Fleming said the quake arrived with a rumbling “that sounded like a train coming to a stop.” It knocked down two chimneys on the converted 1900-vintage home that now houses her parcel-shipping business.

The FBI evacuated its buildings in Washington and New York, but people were returning to the 40-story New York facility by 3 p.m. At the Pentagon, police announced that anyone inside could “shelter in place” while security and emergency personnel checked the building for damage. Shortly thereafter, Pentagon workers who had left the building were allowed to return to their offices.

“The entire office just started swaying,” said CNN’s Chris Lawrence. “As you stood up, you could literally feel that the entire Pentagon was moving underneath you.” He said it lasted 10 to 12 seconds.

The White House and adjacent buildings evacuated as a precaution following the earthquake were later given the all-clear, the U.S. Secret Service said.

A number of other buildings were evacuated, as far away as North Carolina and New York, witnesses reported.

In New York, Gov. Andrew M. Cuomo issued a statement saying, “Currently, there have been no reports of damage to buildings, bridges, roads, power grids, the Indian Point nuclear power plant, or other infrastructure,” .

At Washington’s National Cathedral, spokesman Richard Weinberg said three 5- to 8-foot pinnacles had broken from the central tower. He said stone masons and engineers would assess the damage, which also included other pieces that broke and fell on the surrounding lawn.

The building was evacuated and closed to the public.

Wayne Clough, the secretary of the Smithsonian Institution, said the national museum’s landmark castle on the Mall had cracks in interior walls. There was no immediate indication of structural damage, but the 150-year-old building will need closer examination, he said.

“You want to do an inspection to be sure about that,” Clough said.

Clough, who’s also an earthquake engineer, said the geography of the Eastern Seaboard helped transmit the shock from the Carolinas to New England. The underlying bedrock is largely a solid sheet, “so you get a lot more travel out of earthquake waves than you would in California,” he said.

The two nuclear reactors at the North Anna plant in Louisa County were taken off-line automatically. Nuclear Regulatory Commission spokesman David McIntyre said the agency was monitoring the situation. He said it was not clear whether either plant had been damaged.

The plant, operated by Virginia Dominion Power, lost offsite power and was using backup generators to keep spent fuel cool, the NRC said. Nine other plants in four states have also declared “an unusual event,” the lowest level of concern, but had not shut down, it added.

Court buildings in downtown New York were evacuated. “I was trying to figure out what was going on, like everyone else,” said Manhattan District Attorney Cyrus Vance, who said he had been through many earthquakes when he lived in California. But such quakes are rare on the East Coast, USGS’s Jones said.

“My first thought was, ‘Was it a bomb? An earthquake?'” said CNN’s Susan Candiotti, who was covering Vance’s news conference on the Dominique Strauss-Kahn case in New York. When the shaking started, reporters evacuated the building.

But at the New York Stock Exchange, trading continued.

The quake was also reported to have been felt on the island of Martha’s Vineyard, where President Barack Obama was playing golf.

Jones said that she would expect to see “significant damage” to old, brick buildings near the epicenter. “If you’ve already got some damage, you might want to stay outside,” she said.

She also raised concern that water and gas lines may have been damaged.

“Our building was shaking the way a skyscraper isn’t supposed to shake,” said a lawyer in a high-rise in midtown Manhattan.

Amtrak service between Washington and Baltimore was disrupted, with speed restrictions imposed.

Power outages were reported in parts of Prince Georges County in Maryland.

The District of Columbia Fire Department ordered its units to leave their firehouses and inspect the buildings in their districts for damage.

Brendan Wein, a sales representative at Hoffman Nursery in Roxboro, North Carolina, said he first sensed rattling inside the building.

“We were thinking it was a helicopter overhead,” Wein said. “I was literally shaking in my chair.”

Tish Walker, in Spotsylvania, Virginia, said she was spooked and staying outside for the moment.

“I used to live in California, so I know shaking and this felt big,” she said. “I grabbed my dog and raced outside; my first thought is always that the furnace might explode or a cabinet crashes down on top of us.”