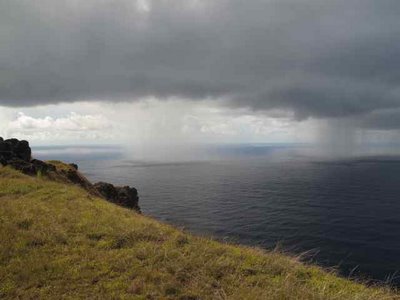 Rain along parts of the West Coast is the biggest feature of the weekend as an approaching frontal system comes in from the Tasman Sea.

Some spillover is still possible over Southland and parts of Otago later in the weekend in a north to northwest airstream.

The odd shower could continue to fall across Gisborne ,Hawkes Bay, Northland and northern and eastern Auckland plus the Coromandel today and over the weekend in an easterly breeze.

There’s a risk today of inland heating resulting in cloud build ups over the interior of both islands with some showers possibly resulting this afternoon.

Next week sees the West Coast the focus again with some rain or showers from Monday to Wednesday before a couple of days respite but then the Easter break could be cloudy with intermittent rain as another front nears the region.

Most of the rest of New Zealand looks mostly settled as a high slowly drifts away to the east but the chance of an isolated shower can’t be dismissed across the north.

The week starting Easter Monday sees a weak front advance over the country with a period of showers.

Yesterday we reported a possible disturbance moving down from the subtropics to affect northern and western parts of the country however the latest data suggests that is now not a likely scenario.

Early April still appears a little messy overall but our confidence of a decent widespreadrain event is still low as it appears more and more days of sunshine and showers are likely to take shape.