RainWatch – Tracking the rain and your reports 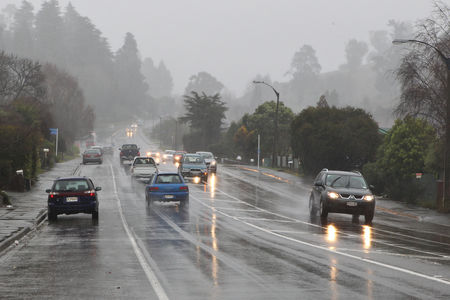 We’ve haven’t been able to say much lately on RainWatch about showers or rain falling over New Zealand each time a story is published but today about a quarter of the country is seeing or has seen some activity.

It is varying quite a bit and some places saw showers which they weren’t entirely expecting and yet other areas have missed out so far when it looked quite likely earlier on.

A few rainfall totals are coming through to WeatherWatch with fifteen millimetres the highest so far about higher ground over a central North Island location. Otherwise it seems to range from a trace to eight millimetres.

A few further showers are expected over northern and eastern parts of the North Island today before clearing this afternoon.

The South Island saw showers move over the Canterbury Plains earlier today and were widespread for a short time however they then settled about the foothills and the northern part of the region as skies cleared elsewhere.

Robyn wasn’t entirely happy about the chance of incoming showers though this morning..”Can’t rain yet! Too lazy to do my washing yesterday. Lol But its trying to spit. Weigh up time washing versus garden. Garden needs it more. Chch”.

Toni updated us – “Sure is rain I’m hearing! I first heard it at 4.30 this morning and its still going strong in Waitara”.

Mandy was happy… ” Yay, it’s raining in Ruawai. Only light drizzle but will settle the dust for a day. Might have to put my raincoat on to feed out the sileage” whereas Helen wasn’t quite so overjoyed..”Dry as a bone in Wairarapa. So much for the forecast. We even had one of our warmer nights of recent weeks”.

“Been raining for the last 20 minutes / half hour in Kumeu We’d just checked the tank levels & the gutter around the roof, had a quick conversation about how it’d be nice to get some rain soon …… then POOF, it rained” said magician Teena!

Krystel was complimentary “You guys are the most realiable weather forecast team. Metservice has been saying its not meant to rain for the next 10 days since and only just changed their forecast to include rain this morning sometime whereas you guys predicted it days ago thanks” and we thank you in return Krystel 🙂

Both Kathleen and Carolyn may have both summed it up best for what’s happening for many of us..”We had a TINY bit of drizzle here in Kapuni. Nothing that would’ve even penetrated below the grass….such a tease!!” and “Started spitting 10 minutes ago. stopped 5 mins ago too!”

A few Aucklanders have mentioned showers moving across the city with puddles forming over parts of the Te Atatu Peninsula. North Shore has seen a little action but a comment coming in from Manakau said there was very little there.

The latest data indicates the next ten days largely dry with pockets of showers in a few areas but these are looking patchy, scattered and hard to pinpoint with nothing more than two or three millimetres likely.

Head Weather Analyst Philip Duncan believes there’s a low to moderate chance of more widespread rain in a fortnight.”The problem is lately the models are occasionally suggesting rain ten to fourteen days out but when the time gets closer anticyclones continue to block and not a lot is eventuating,” he says.

The sub-tropical low that initially looked good for next weekend for parts of the country and also for a few days further on has now become very weak and largely broken up.

Weather Analyst Aaron Wilkinson believes there could be a string of highs until the end of the month.
“If some rain doesn’t pop up in ten or so days it looks as if the chance for much rain during most of March is not very likely at all”.

WeatherWatch sees much of any potential rain or showers over the next week or so hanging off to the north, west and south of our shores.

We’ll continue to track the latest rain and the potential for it everyday as we continue the search for a break from the big dry.

Please say we will see something soon. We had a couple of reasonable showers here at South Head, Helensville but nothing to really have a party about. Our soil is very sandy so any moisture is sucked away very quickly. We had the foresight after the last big drought to put in another water tank, so far haven’t had to buy water, others are not so lucky.

Great that you had a tank put in and you’re in good shape now by doing so.

Fingers crossed for some moisture later next week.

Hi Phil
Wow it even looks now that the rain for mid March may not come. My guess is it will all come at Easter when we actually don’t want it. Full moon can bring stormy stuff

I guess we just keep on watching those models & see what happens. Nature will balance things I am sure of that but hopefully it won’t all come at once

By the way, thanks for the daily updates…awesome

Hope all is well with you and the big dry might just be about that long. Let’s hope that’s not the case.

Hey guys that drizzle(rain) here on the Shore in Takapuna produced at grand total of 0mm…….. with highs for the rest of the month we may end up with 0mm for March……..

It certainly not a big amount!

It’s looking drier as the month starts to get underway unfortunately.

Let’s hope something surprises us and moves in soon!

Thanks for the update Andrew