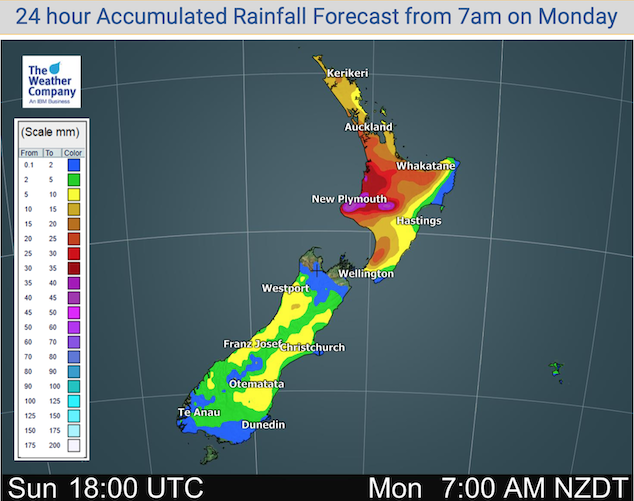 A northerly quarter airflow brings some rain to the upper / western North Island today, mainly dry conditions in the east. Rain becoming heavy about northern Taranaki, Central North Island and perhaps into Waikato overnight. For the South Island we see showers in the west and showers spreading northwards in the east with a southerly change, showers in the east may be heavy with thunder / hail this afternoon about inland Canterbury.

Rain may be heavy on Tuesday morning for the upper North Island, easing from the west midday onwards as northerlies change southwest. Rain not easing about Bay Of Plenty (especially in the east) till evening. The east coast sees some rain also, heavy falls are not likely, this will ease and clear away during the afternoon and evening as a front gradually pushes off to the northeast.

Much drier for the South Island, there could be a rogue isolated shower north of about Greymouth in the west and across into Marlborough during the afternoon. A cold front approaching the lower South Island brings rain to Fiordland by evening then Southland / Otago overnight.

Moving into Wednesday, the aforementioned cold front moves northwards during the day over the country. Morning rain for the West Coast of the South Island clear away, expect showers in the east although conditions may be dry to start first thing about Canterbury through to Nelson before showers move in. Showers clear the lower South Island in the evening and then skies clear up, frosts will be a concern for the lower South Island overnight and into Thursday morning.

Dry further north, showers move into the lower North Island however during the afternoon as southerlies push northwards. Expect some rain for Hawkes Bay / Gisborne from evening.