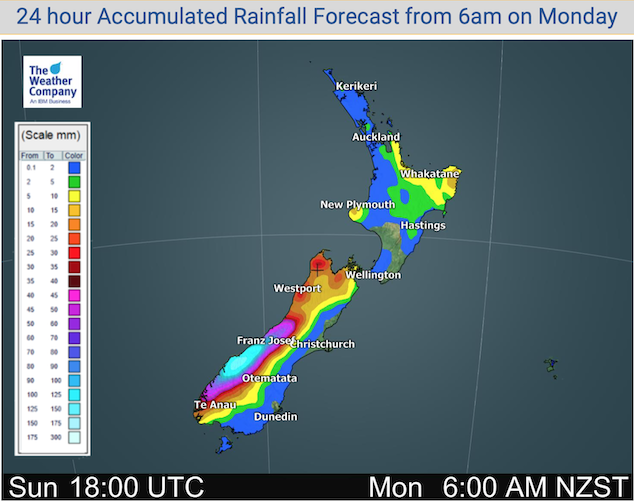 An easterly quarter airflow still brings a few showers to the North Island today, especially in the east. Meanwhile for the South Island conditions are dry in the east and rain builds along the West Coast with heavy falls for South Westland from afternoon. A cold front moves onto the lower South Island overnight.

The aforementioned cold front moves off the upper South Island and onto the western North Island on Tuesday morning. This brings a period of rain with heavy falls. Some rain spills over from the west affecting the North Island’s east coast as this front moves northwards. A wet day for the West Coast of the South Island, mainly dry in the east but there may be a few early spots of rain then clearing.

A cold southwest change brings rain to Southland later in the evening, moving northwards reaching Canterbury around dawn on Wednesday.

Cooler southwesterlies for much of the country on Wednesday and Thursday with showers, mainly in the west but eastern regions see showers as fronts move through. Friday sees conditions ease, still showers in the west, dry in the east. Dry for eastern regions over the weekend, still the odd shower possible in the west but these will be more likely the further south you head.