RainWatch – Not very wet today, rain moves in on Tuesday 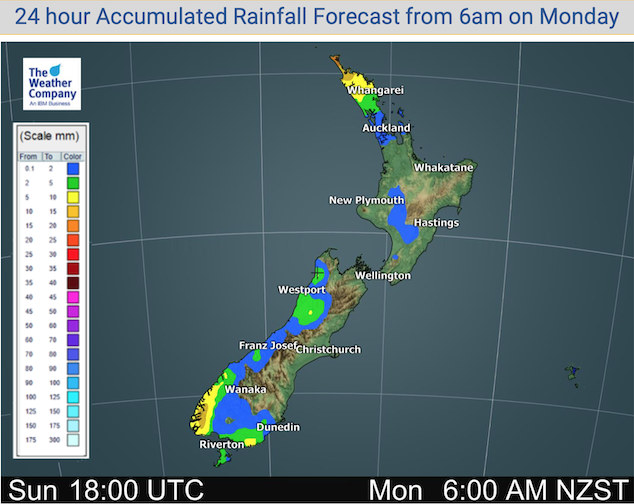 Mainly dry for the South Island on Tuesday, just a few showers are expected for Southland and perhaps the West Coast in the morning then clearing. As a low pressure system from the Tasman Sea starts to move towards the upper North Island, an associated front delivers rain spreading from the north reaching the likes of Taranaki across to Hawkes Bay in the evening. Rain may be heavy in exposed eastern areas like eastern Northland, Coromandel, Bay Of Plenty then overnight about East Cape / Gisborne and Hawkes Bay. Thankfully it will move through fairly quickly so any heavy rain won’t persist in one area for too long.

For Wednesday heavy rain about the eastern North Island eases away, only the odd shower in the west with most spots becoming dry in the afternoon. Northland may see a few showers persist. For the South Island a few showers or drizzle patches about Southland spread up along the east coast during the morning then drying out from afternoon.

Thursday is mainly dry across New Zealand due to an anticyclone, just a light shower or drizzle patch possible about East Cape, Northland, the West Coast and perhaps Southland / coastal Otago.