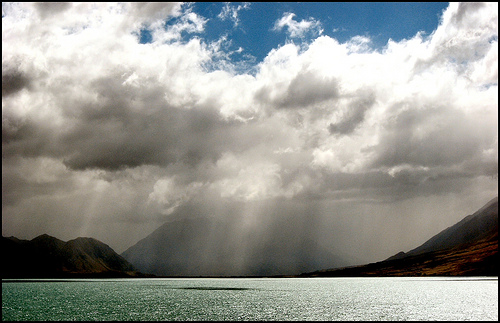 Much of the country over the last 12 to 24 hours has seen rain or showers in some form and some decent totals have accummulated as well.

Rain guages have varied from measuring just a trace to more than 50mm since late yesterday or overnight in some cases and although conditions are slowly improving from the south there’s still a chance for a little more especially for eastern areas of the North Island where it’s certainly needed.

Reports came through overnight of heavy rain and thunder hitting Wanganui,Palmerston North and Levin.Featherston last night also saw something similar and rain continued off and on for Nelson, Marlborough and Wellington.

Auckland saw rain the night before last and then just a smattering yesterday however once again more rain moved in.
Comments into WeatherWatch.co.nz included “East Auckland it’s been trying to rain all day but only only a few drops …had a sprinkle bout 20minutes ago, there’s a light warm breeze and it’s real muggy ….looking out my window across the water…Motutapu and Waiheke islands keep dissaparing in the mist ,,,,,they’re completely gone right now as the rain, scrawly heavy rain has just arrived and it now real windy!” and another posted “Been pouring down in west Auckland for the past couple of hours, plus big downpours in the early hours of this morning. Thank goodness!! I knew if I left my washing out overnight it’d work”.

Many have mentioned since late yesterday that gentle rain had been falling which had pleased many in both rural and urban areas.
Water tanks have been topped up, gardens and lawns have benefitted and there’s a fresh feel for much of the country this morning after weeks of dry, hot weather.

Temperatures have taken a nosedive in the south with many centres dropping to single figures during the night with a cold southerly blowing in southern and eastern areas.

Rainfall amounts overall across the south haven’t been as significant as some northern centres with Christchurch recording 18mm from the event so far.”Even though some predicted heavy falls haven’t really come into being here in Christchurch any rain has been welcome at this point” says Weather Analyst Richard Green.” More showery stuff can be expected off and on this morning before skies clear and then another week of dry conditions are likely” he said.

Waitangi Day is looking largely sunny for the country tomorrow as an anticyclone spreads across the nation. WeatherWatch.co.nz believes there’s still a risk of a few showers across Gisborne and northern Hawkes Bay as the southerly slowly lets go of its grip and also a the chance of a shower across the Far North.

Temperatures are expected to slowly climb up to normal levels for February tomorrow however it’ll be a cool start for many of us with temperatures back down to single figures across the south first thing under mostly clear skies.

Homepage image by flickriver of sun and rain across southern alps