Rain spreads across more than 95% of Australia 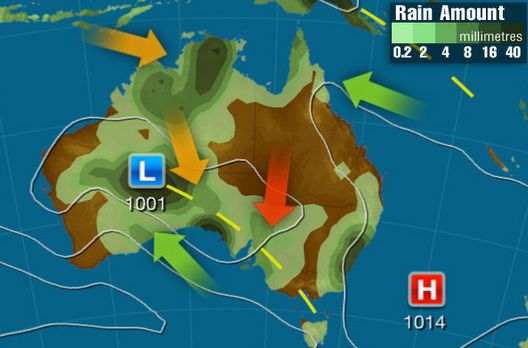 Rain is spreading across more than ninety-five percent of Australia for the first time since La Nina, soaking parts of each state and territory, bringing relief from the heat, leading to flooding and dousing bushfires.

This is likely to be Australia’s most widespread rain event since 2012 (when we were in a La Nina) with two thirds of the country gaining 15-to-25 millimetres.

Rain has already spread across the tropics but later this week will soak much of the south of the country before it heads back north. Most places should see their heaviest rain since at least spring or winter.

Parts of southern South Australia, northern Victoria and New South Wales should gain their biggest falls since at least 2012 with 40-to-80mm, potentially near 100mm in SA. This will be more than the summer average in just a day or two, enough to lead to brief flooding.

Adelaide will be the wettest capital city in the country on Friday with potential for 50-100mm falling in the city and surrounds.

It is advisable for people to clean their gutters given the recent dry, hot windy weather has caused trees to shed leaves and branches.

This rain will bring relief from the heat, go a long way to relieving the drought situation and bushfire threat and also improve air quality. This has been one of the hottest summers on record, one of the driest summers in decades and the most severe bushfire season in five years.

Regarding the dry, Keith in SA and Warracknabeal in Victoria are having their driest summer to date in more than 30 years. With less than 20mm so far they are on target to more than double their totals in the next few days with the heaviest falls they’ve seen in over a year. This will take them close to their summer average of about 70mm.

Griffith in NSW, which is only half way to its summer average of 93mm, should pick up its heaviest rain in a year with near 40mm this weekend.

Barraba, just north of Tamworth, is having its driest summer to date in more than 130 years of records with only 36mm compared to the summer average of 240mm. The northern NSW town should at least double its seasonal total this weekend but that may still leave it more than 150mm below their summer average.

It is not all good news. Given that February is typically a dry month in SA, Victoria and southern NSW, the coming rain will be a setback for some crops, including grapes. The fruit can gain too much moisture causing them to split and become prone to infections.

This widespread rain event will be largely a result of a moisture-laden low pressure system travelling about 3,500km across the country, from the recently monsoon-active Top End through WA and later this week across SA, NSW and Queensland.

A few major differences with this system and previous systems this summer are the intensity and the amount of moisture available. Up until now, a weaker-than-normal monsoon has kept the atmosphere drier than normal in the sub tropics and further south. Low pressure troughs in southern Australia have been too weak to trigger decent widespread rain.

Unfortunately for western WA, southern Victoria, western Tasmania, far northwestern NSW and southwest Queensland the coming rain will only be light and sparse, hardly enough to wash the car.

Looking further ahead, there is hope of follow-up rain despite a weakening monsoon. Tropical lows are still likely to form in the north and at least one of them should travel inland. As a result, central and eastern Australia are a fair chance to see significant rain at the end of the month or early next month.