Rain set to move in 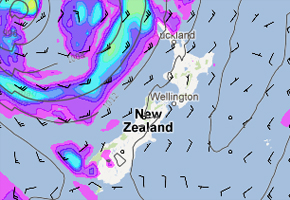 The outlook is still looking as previously expected for this incoming low pressure system, although there are some suggestions in weather data that rain may not be as prolonged now on the east coast of the South Island as initially thought and not as heavy. There will no doubt be some heavy rain on the east coast of the South Island more so south of about Ashburton for a time, it’s just that instead of looking like it was going to last most of next week it is now looking like the bulk of the rain may occur on Sunday through to Tuesday before moving on.

Also this rain should get into Otago early next week which will be welcomed as the heavy rain lately in South Canterbury just hasn’t managed to reach much further south. There is some disagreement amongst the models as to how heavy the rain will be at this stage or if it will be heavy at all.

Rain develops about Northland through to Waikato tomorrow afternoon and evening becoming heavy as it spreads south, the heavy rain slowly moves east overnight and during Sunday clearing in behind however showers are likely to continue in areas. The Bay of Plenty should get a good drenching out of this front due overnight Saturday and through Sunday morning / early afternoon, around 60 to 80mm can be expected.

The South Island will get cloudy and sunny areas tomorrow with north to northeasterly breezes, drizzle about Tasman and Nelson. Drizzle patches about Fiordland also from morning and perhaps Southland and Central Otago more so east of the divide into the afternoon and evening.

Heres hoping that Dunedin and the greater Otago region south of the Kakanuis will receive a good water table replenishing fall this time. This would set this region up for the spring/early summer when equinoxial westerlies have a desiccating effect on soil and plants.
Prior to a sort drought breaking rain of a week or so ago, we have had nothing of any real consequence these past three months or more.The rains that hit North Otago/South Canterbury for the second time in 2 weeks only gave us a miserable light mist down this way.This again was attributable to the low system tracking east on a path too far north of us. We were left with the cold blocking high to the south..