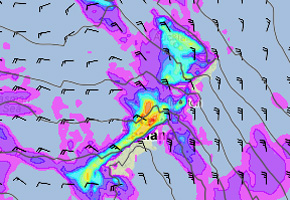 Rain started moving onto the west of the North Island this afternoon and as of now has been moving onto the West Coast of the South Island. Auckland has stayed dry for most of the day however rain has been scooting past down the western coastline, there has been the occasional spit move in during the last hour about the city.

Weather has been dry mostly for the remainder of the country with high cloud increasing in all regions this afternoon.

Temperatures have been warmest about northern Hawkes Bay and Gisborne in the North Island and about some parts of Canterbury, mainly North Canterbury. Christchurch got to 24 degrees this morning however cooled down a little after midday due to a northeasterly breeze yet again.

Government forecaster Metservice has heavy rain warnings out for the West Coast of the South Island from this evening through till tomorrow morning, 80 to 120mm of rain is likely with 150 to 180mm possible near the Glaciers.

Spiller over rain into the headwaters of the Otago and Canterbury rivers is likely too, 100m about the divide between this evening and tomorrow morning.

In the North Island the Tararua Ranges through to Taranaki is likely to receive 80 to 120mm of rain from tomorrow morning through till evening, and in the same time frame Tongariro National Park plus the Kaimanawa Mountains is expected to get 50 to 80mm of rain.

Eastern Bay Of Plenty is also in the firing line with 80 to 120mm of rain expected from midday Wednesday through till Thursday afternoon. There is a chance rain may continue through till evening if the front is slow in clearing away to the northeast.