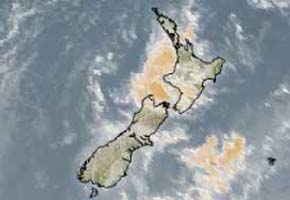 Rain has moved onto the west of the North Island this morning and early afternoon with a few heavy falls in the mix, as the day wears on expect this band of rain to move east and in behind conditions will ease to showers with northerlies changing westerly. There have been a few sunny areas out east this morning but high cloud is increasing ahead of the front moving in from the west.

The warmest place in the country right now is Gisborne on 17 degrees, winds are light from the northeast.

The South Island has a mixed bag with skies mostly cloudy across the island however there are a few pockets of sunshine mainly in parts of South and North Canterbury, also Southland. The West Coast now has showers in most places although there are some dry areas, about the top in Nelson and Marlborough rain has moved in this morning, heavy falls are possible from this afternoon or evening.

South Canterbury and coastal Otago definitely were the spots for the heaviest rain yesterday, up to 70mm fell in Dunedin and 30mm in Timaru. Christchurch received up to 19mm. The rain while it passed over Christchurch was generally around the same intensity as the rain on Sunday and Monday however it moved on and passed by more quickly. Still with the water logged ground it was not needed.