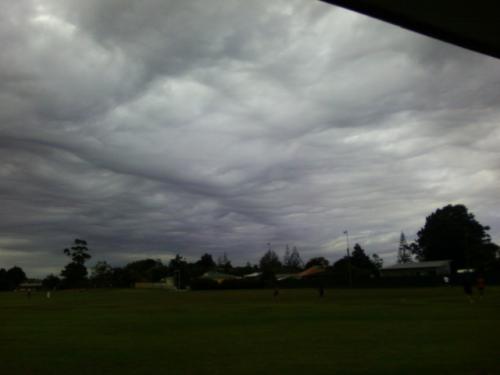 Most commented on story:

Rain was so heavy across Auckland early this afternoon that it temporarily knocked out NewstalkZB’s signal.  Rain fade occurs when clouds are so dense it hinders the satellite signal.

As of 7pm a front was moving across southern Northland, Auckland and the entire west coast.

See the 7pm rain radar below.

A secondary band of heavy showers was moving down Northland, centred over central Northland and Whangarei and heading towards Auckland and Taranaki.   Some localised falls may be heavy.

It appears that many drought areas have received between 15 and 25mm today.

“Unfortunately there is high air pressure building quickly behind this rain so it’s not going to linger – and will quickly be replaced by dry weather”.

However Mr Duncan says it does show the weather patterns have been thought a slow process of change.

“I’ve been saying for a few weeks now that the droughts in the north are likely to gradually ease and that one system wont be the silver bullet” says head weather analyst Philip Duncan.  “Today’s rain is fantastic news as it will give a significant top up to rain tanks and help with grass growth”.

Temperatures remain warm for this time of year with highs in the low 20s predicted today along with humidity in the late 90% range.

“This is good news for farmers needing grass growth.  Temperatures for the rest of the week look relatively mild for northern New Zealand.

This morning the front had all but stopped moving eastwards however as predicted the rain band has moved on to land as the day has progressed.

“We are well aware of how much hope rides on this frontal system so we’re being as open as we can on the current conditions and what that means to farmers and other residents.  At this stage we expect two bands of rain to affect northern New Zealand one about now and the other later this afternoon”.

As of 12 noon a large area of rain spread through central Northland from the Bay of Islands to Dargaville.  Another heavy band was falling on the Far North.

WeatherWatch.co.nz will track the rain radar very closely and bring updates as soon as conditions change.

“Because the rain is mostly moving north to south we expect heavy rain about the Nelson ranges and also about Taranaki”.

MetService agrees with rain warnings currently in place for the Nelson region.

Other warnings remain in place for the West Coast.

Rain has this morning eased in Southland and Fiordland however the threat now is the flood surge heading downstream.

And the water tank was glad to see it!!

Calm and very mild in Napier

10mm of rain here in matamata, will be enough to green things up but not grow any feed. Its going to be a very long and expensive winter for dairy farmers. Im going to Canterbury, least if it doesnt rain down there you can turn a centre pivot on. I been in the Waikato 3 years and had 3 of the toughest years local farmers can remember and ive had enough

We got a whole 6mm today, whoppee do! might give us an extra 1/2 a day’s of water usage in our water tank if we are lucky, is anymore rain meant to be coming our way?

I think theres some heavy rain heading into the Bay of Plenty, im starting to get rain fade on my freeview satellite.

Here in Kerikeri there is blue sky showing in the west. Since 8.00am we have had 49mm a good start for a drought breaker.

Big whoopee…. 1mm of rain today…looks like its mainly all over now…. light showers only for Beachlands. Top temp today of 21.5 and humidity of 96%. (humidex 26.5 so felt sticky). Might have helped the grass a bit but isnt doing much for our empty tanks. :o((

Only an hour and a half of rain here In Pukekohe. Tanks are looking better though. We only had a weeks worth of water left now maybe 3-4.