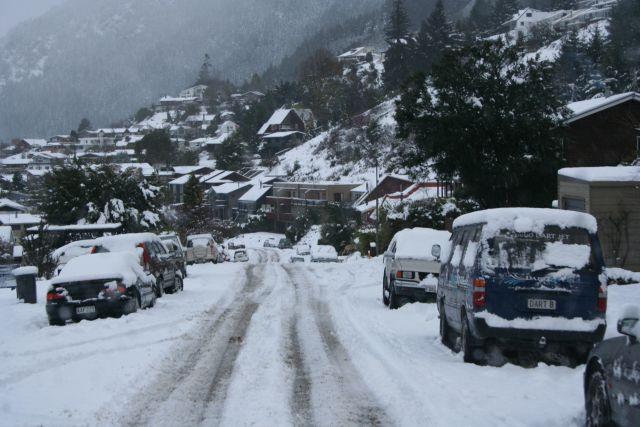 Two systems are working together to bring a “bit of everything” to New Zealand this weekend reports WeatherWatch.co.nz.

To the north lies a very slow but large low pressure system while in the south west a large high is today changing shape to fire up a very cold southerly change – potentially our coldest of the year.

“The low in the north is continuing to pump out rain band after rain band – but with dry spells in between” says head weather analyst Philip Duncan.  He says there is a low to moderate risk of isolated thunderstorms across northern New Zealand on Saturday morning and on Friday thunder was reported over Whangarei as a band of heavy rain and showers moved south.

Throughout Saturday the rain will continue to slowly nudge southwards, clouding up the skies over the South Island.

At the exact same time a cold front is firing out of the Southern Ocean and will move in to the Southland coastline by late afternoon bringing a cold southerly change and showers with sleet or hail.

By nighttime another cold front will arrive, bringing snow to sea level in Southland then into Otago and Canterbury during Sunday, including most of the main centres along the eastern coastline.

As the cold air hits rain bands already over the North Island rain will turn to snow with WeatherWatch.co.nz forecasters predicting rain and sleet in Wellington late Sunday and more so into Monday with a snow/rain mix possible in the higher suburbs and also near or in Palmerston North, Masterton, Taupo and Stratford overnight Sunday and into Monday.

Snow could affect driving conditions in both islands, with North Island roads most exposed to snow being the SH2 over the Rimutaka Ranges, SH5 the Napier Taupo highway and SH1 the Desert Road.  Highest risk for the South Island is from Saturday night to Monday morning, while the North Island’s risk is from late Sunday to early Tuesday.

– Homepage image / A not so distant memory, snow in Queenstown just 2 weeks ago / Alison Metherell

It is currently showery on and off over South Hokianga but the showers tend to be heavy and the sky has that ominous feel about it.

Overnight we had a thunderstorm that seem to stand still for and hour or two with the lightning causing phone/internet problems ( now fixed ) and also being both fork and sheet flashes some very close to the ground. In the Waimamaku upper river area we took between 90 and 100mm of rain and oldtimers are saying that the river is the highest it has been in several decades. There is damage to some roads – they being gravel roads.

Hey its Phil from Levin. Well its beautiful here 17.3dec sun and cloud no wind , barometre pressure 1001 but showing rain on the weather station. Kids enjoying the warm conditions which is good for them and us adults to.

Kaitaia was hammered with some serious thunder and lightening along with very heavy rain from 9 until about 1 this morning. I have 40mm of rain in the gauge since 5 last night. Man it is so wet on the farm now.

in frankton queenstown its a good frost was -6.5 looks like its going to be a nice day

We have all the right conditions for snow around Nelson but it all comes down to this – how much rain do you get normally with a southerly? We think snow will fall to low levels in the area but unsure if it will make it as far west as where you are – should be close though.

Hi
I hear that its possible there may be a dusting of snow in the Waitakere ranges and Hunua ranges around Auckland?
Could it be possible for a dusting on the tops of the Bombay hills?