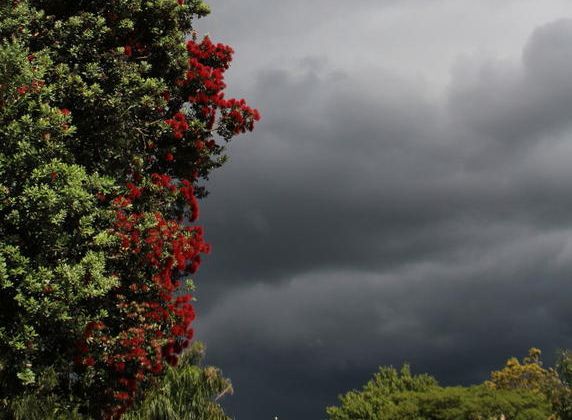 For some people rain falling in December is great news, for others it’s a real annoyance…much like a changing rain forecast.

Right now the weather over the Tasman Sea is volatile and changeable.  Rain is being carried over the Tasman Sea to New Zealand…but it’s hard to lock in the timing, as the high further south will help control where and when the rain will fall this weekend and early next week.

Usually as we get closer to the event it becomes easier to forecast what is likely to happen next.  However this weekend’s weather has been like predicting the closing minutes of the Rugby World Cup – the high and the incoming low seem evenly matched in strength and it’s making it tricky for us to work out the exact movements/timing of rain bands.

But, like the final moments of the RWC, we can also see one team slowly making it towards the try line.  In this case it’s in the form of mostly black clouds – with rain likely to make it over the try line this weekend in the upper North Island – and then return again next week in patchier form.

The next 10 days are unsettled – with plenty of dry weather, especially in the South Island – but rain or showers will return later next week to the North Island.

Not all regions wanting rain in the North Island will get it in the coming 5 days – but another low is coming next weekend.

Changeable Forecasts
We know rain clouds are coming – but there are two questions that we, and the computer models, are still struggling to 100% tie down – the exact path of the rain, and the exact timing.  Highest risk areas for rain are northern New Zealand (north of Waikato and Bay of Plenty) – with Sunday perhaps the likeliest ‘wet day’ at this stage.  However early next week rain will be hovering near northern New Zealand and may stall over land (or just offshore). One to monitor.

It’s frustrating when forecasters can’t 100% nail incoming rain bands – but we prefer to honestly share the challenges we deal with, while other forecasters might put on a confident face knowing their forecasts will likely change.

If you’re attending Auckland’s Christmas in the Park we suggest you double check rain predictions across Saturday at WeatherWatch.co.nz – we’ll be monitoring it extra closely with such huge interest.  Despite a mainly dry Saturday on the way we can’t rule out wetter weather moving in to Auckland from Northland in the evening…timing is key, so that’s why we are putting on extra updates this Saturday.

Christmas Day
We still can’t lock in Christmas Day as it’s too far away – but the long range models show a weak low crossing New Zealand in the final weekend before Christmas.  A high over Tasmania may then drift in.  It’s too far out to lock in if that high will cover all of New Zealand by Dec 25th – but WeatherWatch.co.nz will have our first Christmas Day forecast out early next week!

Considering our recent poll showed only 57% support for a “sunny and hot day” this Christmas Day the pressure might be off forecasters this year to create the “perfect forecast”!