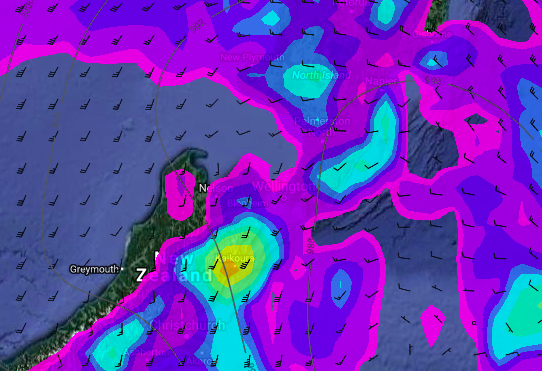 UPDATED 4:14pm — The main wet cold southerly has arrived in Wellington and caused some minor flooding – but is already easing and clearing thanks to strong southerlies up to 90km/h. Heaviest falls were between 2:30pm and 3:30pm says WeatherWatch.co.nz.

Winds from the south may increase though – peaking around about now and into the early evening. We are not expecting damaging winds – but due to both the flooding and earthquakes this week the threshold for infrastructure damage may be much lower, so problems are possible but generally not expected.

Meanwhile, the worst of the rain has also eased in Kaikoura and the quake epicentre. Showers remain but will ease tonight. Strong winds are also hugging the Kaikoura coastline with gusts into gales – but not damaging severe gale.

There have also been thunderstorms – isolated – around Wellington, Wairarapa, Hawke’s Bay and Waikato this afternoon as big showers develop ahead of the southerly front.

It is also going to be cold tonight in the South Island. inland from Kaikoura overnight lows may drop into the low single digits and mid to late single digits closer to the coastline, which is considerably colder than it has been.  It’s short lived though.

WARM SUNNY WEATHER COMING FOR KAIKOURA
While today is a bit wintry in Kaikoura and along the coastline warmer weather is coming. A return to westerlies this weekend means the area will have highs in the low 20s this Saturday and Sunday, then as warm as 23 to 25 degrees Monday to Wednesday next week under mostly clear skies.

In positive news – the trend for the next WEEK in this area is general mostly dry, mild and fairly settled with no severe weather in the WeatherWatch.co.nz 7 day forecast at this stage.