Rain and strong winds moving in 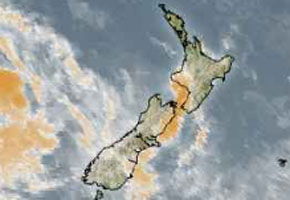 Rain has moved onto the West Coast of the South Island this morning, the odd shower is also pestering Kapiti. Northwesterly winds are building about the top of the South Island and lower North Island as the squeeze is on, 56 km/h northwesterlies are blowing near Clifford Bay which is just south of Blenheim. Awhitu on the western side of Manukau Harbour also has strong winds with 56 km/h west to northwest winds currently.

Due to the northwesterly winds building naturally many eastern areas of both islands have warm temperatures as was eluded to earlier this week about how this week would unfold, periods of northwesterlies followed by southwest changes. Christchurch has the main centre high currently at 23 degrees, there are a few 24 degree readings out there also between Ashburton and Christchurch.

Eastern areas of the North Island are not far behind with 20 degrees being reached so far in Napier and 21.5 in Gisborne. Auckland has 18.2 degrees and a westerly at 37 km/h.

Low risk of an isolated rumble, but this front is quickly fading out upon landfall (7:50am) so probably unlikely.