Home > News > Rain and strong winds moving back to NZ...

Rain and strong winds moving back to NZ 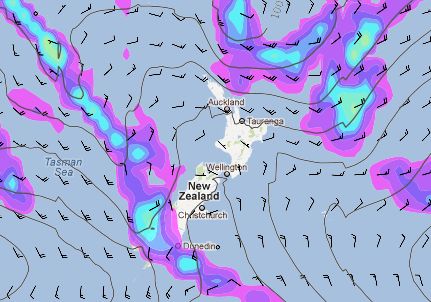 Saturday started with a weather bomb, Sunday saw quickly clearing weather, Monday was like summer again for many places and Tuesday has seen the clouds rolling back in – and by Wednesday rain clouds will be approaching New Zealand from the north east and south west.

WeatherWatch.co.nz says the country will be the meat in the sandwich as the fronts move in, bringing rain, showers and gusty winds to many areas.

Despite the bleak outlook severe weather isn’t expected (ie, few warnings, if any, will be issued)

But for those dealing with the clean up and repairs around Wanganui, Patea and Taranaki the forecast won’t be a welcome one with east to south east winds building on Wednesday and becoming brisk by Thursday.

Heavy rain may also push back into the Gisborne region – and may cause more problems for contractors trying to clear a giant slip in the Waioeke Gorge.

Windy weather is also expected through the Southern Alps and the West Coast where nor’easters will become strong for a time – possibly gale force.

Meanwhile a weak low near Northland will push more cloud, humidity and overnight warmth into the upper North Island on Wednesday – bringing rain or showers in at night and across Thursday, along with a strengthening east to south east wind which will become blustery in exposed places.

At the same time a very strong high will push into the lower South Island – and is the main reason for the strong winds across the country.  (the higher the air pressure the stronger the winds often are around it).

By the weekend a new low – a fairly large but weak one according to the latest models – will start to develop in the Tasman and move towards the country by Sunday or Monday.

Thank you but No thanks.. I do not want to experience another day, like Saturday’s weather bomb Phil.
..
I was in the thick of in on Saturday – after arriving in Wanganui at 6 am arriving for work. Within minutes of arriving the storm struck, it felt like a wind tunnel and tornado. I have never seen or been in winds like it. Loud Bangs as power went off from different parts of the city. At one stage there was a noise like a jet engine as I saw several roofs being torn off. And Hay Bails the large round ones with the plastic on them flying through the air. I could not stand up against the wind, it was a case of taking shelter as iron and rubbish bins and other small object become like projectiles. Animals weren’t sure of where to go as objects hit them in their paddocks.

I made it back in my car just in time as another power line came down sparking on the ground not far from where I was taking shelter. That is where I remained in the car for the next three hours till the all clear was given, that the wet ground was safe. It was the most scariest day in my life.