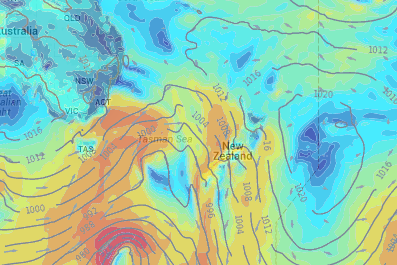 After the fireworks of today’s weather, 2015 is looking like getting off on a considerably quieter foot – with an anticyclone settling things down as it moves toward the country, and a southwesterly airflow eases through the day.

For the upper North Island, any early showers will clear, then give way to sunny spells and west to southwest winds.
In the Bay Of Plenty the year starts out mostly sunny in the morning (after any early showers clear).

For the lower North Island, it’s sunny areas and some cloud, accompanied by south to southwesterly winds.
Early showers clear around Napier, then the Gisborne area by late morning, with sunny areas increasing into a pleasant day.

Wellington may see slightly cloudier skies from morning as those winds tend southerly, and there may also be a brief shower about early afternoon – otherwise itâ€™s looking mainly dry.

Over much of the South Island expect south to southwesterly winds, bringing morning cloud and early showers – though these will clear and break into sunny areas.
Winds along the east coast swing round to the northeast in the afternoon and become brisk for some – Christchurch in particular.

Further north, winds will tend northerly in the afternoon for Nelson, and it’s mostly sunny for the day, with only light winds in the morning.

Any morning cloud clears in Southland to become mostly sunny – while the prevailing winds blow west to northwest.