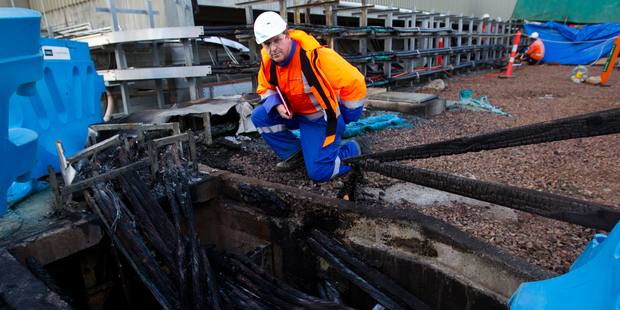 A former Vector and Transpower board chairman is questioning why better fire prevention methods were not in place at a Penrose substation after fire broke out, cutting power to swathes of Auckland.

As 18,000 homes and businesses in Auckland’s eastern suburbs spent a second day and night in the dark and cold yesterday, Wayne Brown said a sprinkler system should have been operating in the substation’s switchyard.

He has also criticised a lack of engineers on the two companies’ boards, saying the deficiency could limit understanding about the practicalities and dangers of the network.

Vector’s cables at the Transpower substation caught fire about 2am on Sunday, causing blackouts to 85,000 Vector customers.

Parts of Remuera were still without power this morning.

Electricity was restored to most parts of Sylvia Park, Carbine Road and Mt Wellington overnight.

Power dropped out again in parts of Glendowie, Newton, Eden Terrace, Newmarket and Grafton yesterday before being restored.

Vector warned customers who had power restored they might be “dropped” when consumption surges as more people wake up and the business day begins.

“We may have to drop some customers power as the morning peak comes up,” Vector said in an update at about 7:15.

“Please conserve power if you’re in the affected area.”

Repairs overnight restored power to most areas, but 324 customers remain without electricity.

The company pushed back its estimated reconnection times last night by two hours because of “operational requirements” and warned it could not rule out some customers heading into a third day of blackouts.

Affected businesses and homeowners have already begun demanding compensation from whoever is responsible for the network failure with claims to insurance companies trickling in. Paymark released figures yesterday showing the sweeping outages had caused an estimated $4.3 million drop in spending on Sunday alone.

Fletcher Building was forced to shut down several factories, with the company taking a financial hit in the millions of dollars.

It still wasn’t clear what caused the fire, although the two companies had all but discounted the possibility it started from cables simply overheating.

However, Mr Brown – a former chairman of both companies – said similar incidents would continue to happen as long as the companies focused more on the business side of operations and ignored the engineering intricacies.

“My contention is that Vector and Transpower will continue to have these problems because at the governance level there’s not enough engineers.

“They haven’t got sufficient ability to question things,” Mr Brown said. “There’s just not enough experienced engineers on those boards. I think there will be more failures until they change that. I just think they focus on the wrong stuff … on shareholders and balancing, rather than performance.”

He conceded that Penrose was a peculiar substation because the basalt rock meant burying the cables was too difficult.

There should nevertheless have been fire prevention measures in place, he said: “Not to have sprinklers or something in there, that’s a bit odd.”

Vector said governance matters should be referred to the company’s chairman.

Transpower general manager of system operations, John Clarke, said the nature of the terrain meant the “cable trench” was actually above ground at Penrose, rather than buried as would usually be the case.

The cables were stacked, in what he described as being akin to ladders lying on top of each other, allowing air to circulate between them and keep them cool.

Aspects relating to how cables were managed at the site would be looked at. “There’s obviously a lesson there, after what we have seen.”

Vector chief executive Simon Mackenzie said it was not unusual not to have sprinklers in a substation switchyard.

“[Having sprinklers] would be reasonably unusual,” he said. “There are fire sprinkler systems in the building. There weren’t any with regard to the outdoors.” That possibility may be looked at as part of the investigation into the failure, he said.

Compensation, too, would have to wait to be considered. It wasn’t yet clear who was at fault for the outage so compensation requests couldn’t be considered until the cause of the fire was known, he said.

All hospitals were expected to be fully operational today, but dozens of surgeries had been rescheduled.

Retirement villages “had no contingency for any of this”

Relatives of residents in care at two Ryman Healthcare villages say the communities were like scenes from horror films.

The healthcare provider’s Grace Joel in St Heliers and Edmund Hillary retirement villages in Remuera were blacked out following the fire in Vector’s cables at the Transpower substation in Penrose about 2am on Sunday.

“There was no lighting, no heating,” a relative of a resident at Grace Joel said yesterday. “The place was like a fridge. It was just like a wind tunnel, it was just freezing everywhere.

“The nurses were walking around with torches and the head nurse had a head lamp. The lifts weren’t working so there was no way to get [the elderly] people out of there. I don’t know whether they managed to shower them or anything. They just had no contingency for any of this.”

Residents at Edmund Hillary Retirement Village in Remuera were still without power yesterday.

The daughter of a resident at Edmund Hillary said the scene there was eerie on Sunday night.

“It was unbelievable, there was nothing there. It was completely black … It was like a horror movie.”

There were no lifts working in the seven-storey buildings, she said, which meant the residents who couldn’t walk down stairs couldn’t leave their floors.

The electric gates and front doors were wide open and there was no security monitoring who was coming or going, she said.

Ryman spokesman David King conceded the retirement villages did not have sufficient back-up generators and were slow to source enough to adequately power the care facilities.

“The battery system kicks in immediately and they are capable of running our emergency systems such as exit lighting and power supplies to our care centre. The immediate priority was our care centre which is home to about 200 residents with a variety of health needs.”

However, generators to power the rest of the villages were sourced from as far away as Whangerei, Mr King said, and didn’t arrive until early evening on Sunday – meaning the residents were without power for a full day.

“There was a lag before the back-up generators arrived and could be configured. The generators did not arrive quickly enough and this is something we will be reviewing after we’ve got power back. ”

Power resumed as normal at Grace Joel about 7pm on Sunday but hadn’t returned in Edmund Hillary by yesterday.

Staffing was doubled at the two centres, Mr King said, and countered that “we also put on extra security at the gates and there are regular patrols”.

Ryman hoped to have six generators on site by the end of the day yesterday, he said, almost two full days after the power went out.

Trust waits for briefing on outage

The publicly elected electricity trust which owns most of Vector has yet to have a briefing from the energy company’s chief executive.

Auckland Energy Consumer Trust chairman William Cairns said the trust would be seeking answers. “We will be asking what actually happened, why it happens and how to prevent it happening again in the future.”

He said he hoped to speak to Vector’s Simon Mackenzie today but didn’t know when that would happen. A Vector executive had given a briefing yesterday morning.

Mr Cairns said it was “never acceptable” to have a large-scale power cut and the current situation had directly hit those who were the beneficiaries of the energy trust which owned Vector.

Despite not hearing from Mr McKenzie by mid-afternoon yesterday, Mr Cairns said: “I’m happy with the information I’ve got.”

In contrast, Auckland deputy mayor Penny Hulse said she had “quite a long talk” yesterday morning and was expecting a meeting today or tomorrow.

The five AECT trustees pick up $343,000 together for their roles representing the public’s ownership of Vector. Anyone with a power bill inside the old Auckland Electric Power Board area – largely where the cuts have happened – owns shares in Vector through the trust. It is mostly invisible, except when it pays out an annual dividend.

It does attempt to increase its visibility when it distributes its dividend. Alongside this year’s $330-a-household payment – a total of $100 million to 312,000 people – the trust created Kenny the Kingfisher, part of the $2 million it cost to get the money to people and make them aware of where it came from.

Kenny, in a promotional video, said the the trust’s job was to “make sure power is supplied efficiently and economically. No one knows Auckland’s power lines better.”