Home > News > Quakes not increasing, but human risk is...

Quakes not increasing, but human risk is 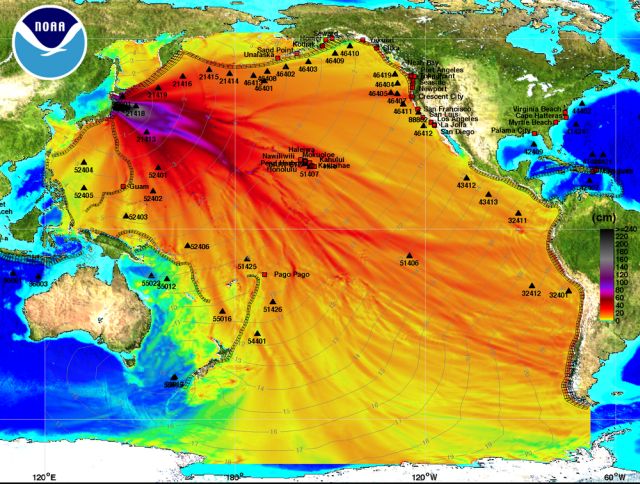 (CNN) — The 21st century is still young, and it has already suffered a spate of catastrophic earthquakes across the world — from Haiti to Chile and New Zealand. The misery continued Friday with an earthquake off Japan so big its seismic waves made the cliffs along the Hudson River wobble by almost an inch.

The event was one of the largest ever recorded on seismometers, with the latest estimates from the U.S. Geological Survey putting the magnitude at 9.
Only three earthquakes came close to this magnitude during the whole of the 20th century.  So what’s going on?
Geologically speaking, it’s nothing special. Seismic activity is not increasing, and the tectonic plates driving all the seismicity are not accelerating — not by any geophysical measure we have at our disposal.
Truly huge earthquakes seem to have become more frequent over recent years, partly because their impact on society has risen as vulnerable cities have mushroomed and become more fragile, and partly because of the rarity of gigantic earthquakes and their tendency to cluster for statistical reasons and nothing more. It’s a matter of perception and coincidence.
But this does not mean that we should ignore the rising risk of devastating earthquakes along dangerous fault zones in places that have been seismically quiet for a long time, but where increasingly cities have risen.
Only a few weeks ago Christchurch, New Zealand, was struck by a damaging earthquake of magnitude 6.3, hot on the heels of a larger but less damaging event late last year of magnitude 7.1 Their magnitudes were rather small compared with the seismic event Friday near Sendai, Japan: The Japan earthquake released roughly 1,000 times more energy more than the first New Zealand quake and 15,000 more than the destructive second.
It’s hard to relate the magnitude of an earthquake to how much damage it will do, and it’s hard to get a sense of how often earthquakes of different sizes take place.
Earthquakes of magnitudes 6 and 7 are common and largely pass unnoticed by the public because they strike below the oceans, or in remote areas, and cause little to no damage. For example, a magnitude 7.2 earthquake struck offshore Sendai on Wednesday, two days before Friday’s event. It was felt in Honshu but raised few eyebrows in a country used to experiencing minor seismic shaking on a monthly basis.
Seismologists are calling this event a foreshock of the Friday earthquake. It’s too bad it wasn’t deemed a foreshock until after the main event, but prediction of earthquakes is still a long way off.
Giant earthquakes are indeed rare. Even in countries along the Pacific “Ring of Fire,” where tectonic plates are squeezing against each other at inches per year, and gradually storing up more and more elastic energy along big faults, it takes hundreds of years for a jammed fault to reach a point where it will unstick in a magnitude 8 or 9 earthquake. Historical records are never long enough to estimate the average time between events, or to calculate the odds of their reoccurrence with any reliability. Cultural memory is even less reliable.
No, we should not interpret the recent cluster of destructive earthquakes as a sign that the Earth is cracking up. But we should also avoid complacency, because the risk to human populations from earthquakes is undoubtedly on the rise.
Megacities across the world continue to grow, and many are along major faults. Most of these faults have not generated giant earthquakes in recent memory, but historical and geological records, supported by abundant geophysical data, show they do so every few hundred years. For example, along the Himalayan front, a very active fault zone situated between Pakistan, India and Bangladesh lie cities such as Kathmandu, Nepal; Islamabad, Pakistan; New Delhi, India; and Dhaka, Bangladesh.
Most of these megacities have seen their populations swell drastically since the last great earthquake struck. Since then, one- or two-story dwellings built from light materials have been replaced by multistory concrete buildings that are much more dangerous during powerful seismic shaking.
The numbers of people exposed to risk has risen from thousands to millions. None of these megacities or their populations enjoy the remarkable level of earthquake preparedness seen in Japan. Projections of the numbers of fatalities in magnitude 8 events and above reach the terrible levels seen in the Haiti earthquake in January 2010.
Although the recent cluster of catastrophic earthquakes is a coincidence and nothing more, perhaps it will raise awareness of the pressing need to reduce the risk to humans in vulnerable cities across the world.
Tsunami risk is also growing in coastal megacities. Videos of the unstoppable advance of the waves driving through Sendai were a terrifying reminder of a tsunami’s power.

There was little damage along the U.S. coasts from this week’s events, but memories of the destruction caused by the Sumatra tsunami in 2004 are still fresh.
It is therefore acutely disappointing that House Republicans have proposed cuts in the National Oceanic and Atmospheric Administration budget that would likely lead to furloughs and some closures of the Pacific Tsunami Warning Center in Hawaii.
We should be increasing investment in warning systems and earthquake-tsunami monitoring, not cutting them.
CNN Editor’s note: Colin Stark, Lamont Associate Research Professor at the Lamont-Doherty Earth Observatory of Columbia University, is a geophysicist and geomorphologist whose research focuses on the effects of typhoons and earthquakes in triggering landslides and eroding mountain rivers.
The opinions expressed in this commentary are solely those of Colin Stark.