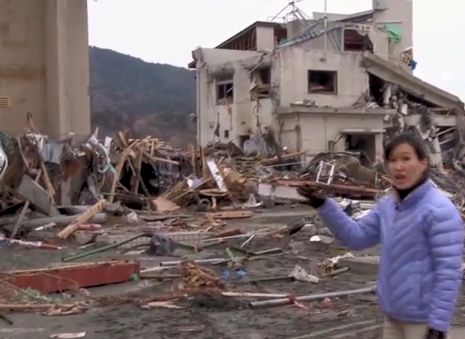 You can see the survivors making the choice as they walk through the debris-strewn main street of Otsuchi in Japan — stay or go?

Some ramble as they walk, as if in a daze, trying to comprehend the present and match it with an uncertain future. Others look like tourists, coolly trying to place a cousin’s house or a grandmother’s garden.

But the dilemma is the same for them all: do you stay and rebuild in a devastated small town, struggling economically even before the tsunami, or pull up stakes and start anew in a big city?

Twenty-one-year-old Ayano Okuba doesn’t hesitate with her answer. “Even though I like Otsuchi, I can’t come back here.” The tsunami flattened Okuba’s childhood home and killed the matriarch of her family, her grandmother.

There’s nothing left of her childhood to rebuild, she says.

Akita Sasaki, a life-long resident of Otsuchi, also doesn’t pause with his response. “I won’t leave,” he says. “I have a lot of friends afraid to stay in Otsuchi. But I won’t leave.”

Sasaki lost his parents, his house, his job and nearly every part of his beloved town. But it remains his home, he says emphatically.

As of October 2009, 15,590 called Otsuchi home, according to the city. The Iwate prefectural police say, so far, the death toll stands at 504 people, with 1,048 missing. The police caution that the numbers are likely not accurate, because the tsunami wiped out entire families in Otsuchi, so there’s no one to report missing or dead people. Almost 6,000 people are homeless.

The choice to stay or go is complicated by the loss of the city’s leaders.

On the day of the disaster, Otsuchi’s city hall turned into a rapid command post. The mayor, 69-year-old Kohki Kato, led the charge to set up the command center outside the city hall, minutes after the magnitude-9.0 earthquake struck.

The mayor and his government had warning the tsunami was coming and evacuated to the second floor of the city hall, believing they were safe. The tsunami swallowed nearly the entire building except for the rooftop, where some of the city workers stood.

More than half of the city’s leaders are dead or missing. Among those killed was Mayor Kato.

After the tsunami, a gas explosion erupted and a fire swept through the town, reducing the rubble to charred metal.

The cruelty of nature is etched into the faces of the survivors of this town’s government, who work around the clock at the main evacuation center, trying to make up the manpower of their dead colleagues. Occasionally, they cry through paperwork, trying to help residents register the dead.

Next to the registration table, a pile of pictures sits, charred and muddy. Evacuees finger through the yellowing pictures, looking to salvage some part of their personal history.

Beyond the pictures, a stunned group of city workers meets to stage the next phase of the city’s recovery.

The deputy mayor is now in charge and college students, who were set to begin work on the first day of the new fiscal year, April 1, started early on March 11.

The government is barely there, leaving one victim to clutch the arm of Japan’s vice minister of the cabinet office as he made a visit to the evacuation center. The elderly woman pleads for help, saying her town needed more supplies, food, and steady heat and electricity.

The minister, Shozo Azuma, in a rare display of public affection, touches the woman’s arm. His answer to her isn’t audible, but she bows deeply and cries.

“I believe that the people who are living in this prefecture, who are in this miserable situation, they will recover. I believe it,” says Azuma.

That is easier said than done, say many, who have seen young people leaving this town for a generation. All along Japan’s northern coastline, the population is grey and dwindling each year. The economic might in Japan remains in its large cities, not in its small coastal communities.

Akita Saski says losing the young now will kill the rest of the survivors of his town. More of us need to stay, he says. But even as he emphatically says that, he knows it will be as large a challenge as clearing the massive debris from his hometown.