Quake “flurry” jolts central New Zealand – and is there a mystery fault? 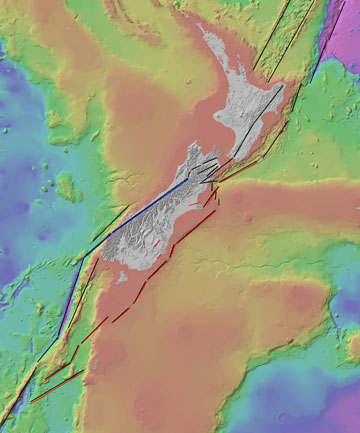 While most of us were sleeping, New Zealand was shaking again, a series of six fairly low magnitude earthquakes hitting the middle and north of the South Island.

The strongest of the six, a 4.9 magnitude quake, struck near Seddon, the epicentre of the shakes which caused minor chaos in Wellington two weeks ago.

GeoNet recorded the 4.9, along with several small aftershocks, after 1am this morning.

News has emerged from the University of Otago suggesting there could be a parallel fault system lying to the east of the South Island.

An Otago geologist, Phil Ford, has drafted a proposal presenting possible evidence of a major intra plate fault, running parallel, and of similar size, to the Alpine fault which runs almost the whole length of the country.

His paper, which has not yet been published, suggests NIWA data from bathymetric charts supports the idea of an undiscovered second major fault line, which could have a strike length of around 1000 kilometers.

Other University of Otago scientists have said publicly they will wait for more data before making assertions, and the current known fault system is providing them with more than enough to worry about at present.